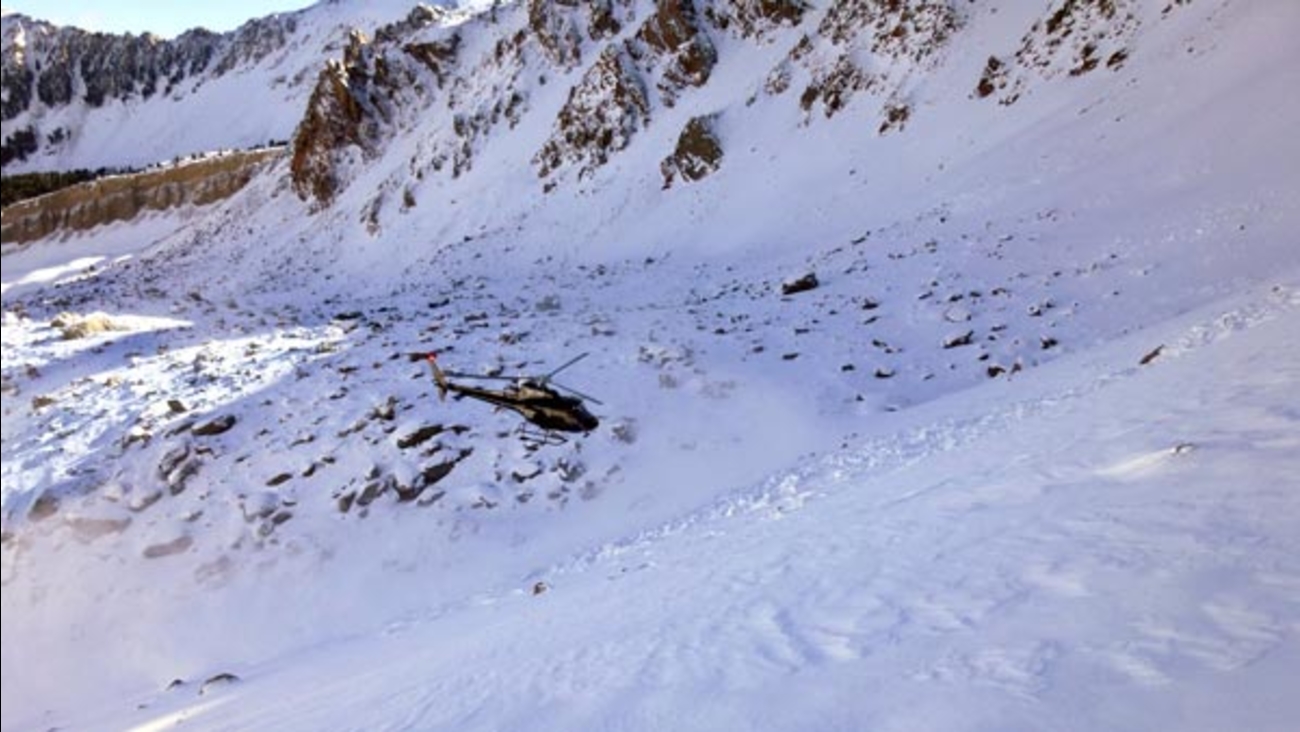 In this Monday, Oct. 9, 2017, photo provided by the The Gallatin National Forest Avalanche Center, a helicopter searches an avalanche debris field for a missing skier on Imp Peak. (By THOMAS PEIPERT)

Just two weeks before renowned climber Hayden Kennedy killed himself following the death of his girlfriend in an avalanche in Montana, he wrote on a climbing blog that he had watched too many friends die in the mountains over the last few years.

"I've realized something painful. It's not just the memorable summits and crux moves that are fleeting. Friends and climbing partners are fleeting, too," he wrote for the "Evening Sends" blog. "This is the painful reality of our sport, and I'm unsure what to make of it. Climbing is either a beautiful gift or a curse."

Gallatin County sheriff's officials say Kennedy, 27, and Inge Perkins, 23, were skiing on Imp Peak in the southern Madison Range on Saturday when they triggered an avalanche in a steep, narrow gulley at about 10,000 feet (3,048 meters) above sea level.

Perkins, also an accomplished mountain climber, was buried by the 150-foot-wide (46-meter-wide) slide. Kennedy, who was partially buried, pulled himself free and hiked out for help after he couldn't find his girlfriend.

The area had received a foot (0.3 meters) of snow since Oct. 1, which was on top of about 4 feet (1.2 meters) of dense snow that had fallen over the previous two weeks, according to the Gallatin National Forest Avalanche Center.

Kennedy, who had recently moved to Bozeman, was found dead in a home Sunday as search teams prepared to recover Perkins' body.

"Hayden survived the avalanche but not the unbearable loss of his partner in life," his parents wrote in a statement released Tuesday.

They described their son as "an uncensored soul whose accomplishments as a mountaineer were always secondary to his deep friendships and mindfulness."

Kennedy, who grew up in Carbondale, Colorado, had been working on his EMT certification while Perkins completed a bachelor's degree in mathematics and education at Montana State University.

Kennedy was perhaps best known for climbing the Southeast Ridge in Patagonia's Cerro Torre in 2012 and removing many of the bolts placed by controversial Italian climber Cesare Maestri more than 40 years earlier.

Afterward, he and his climbing partner were accosted by locals and detained by police. But Kennedy's father, Michael Kennedy, who was editor of Climbing Magazine for more than two decades, beamed with pride.

"You made a courageous first step in restoring Cerro Torre to its rightful place as one of the most demanding and inaccessible summits in the world," the elder Kennedy wrote in an open letter to his son that was published in Alpinist Magazine in 2012. "I never would have had the guts to take that step myself, even in my best days."

Michael Kennedy, an accomplished mountaineer in his own right, also wrote to his son about losing multiple friends to the sport.

"An awareness of mortality prompts us to focus on what's important: developing a strong community of family and friends," he wrote.