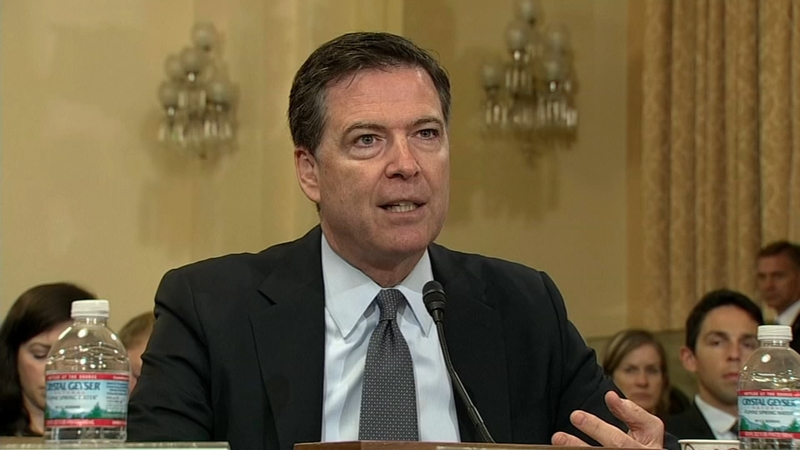 WASHINGTON -- House Republicans are preparing to interview James Comey behind closed doors Friday, hauling the former FBI director to Capitol Hill one final time before they cede power to Democrats in January.

Comey will appear for the interview after fighting a subpoena in court. Under a deal struck with the House Judiciary Committee, he will be free to speak about the questioning afterward and a transcript will be released. He had argued that Republicans would selectively leak details from the interview.

Democrats, who will also attend the interview, have said the GOP investigation is merely a way to distract from and undermine special counsel Robert Mueller's Russia probe. Mueller took over the department's investigation when he was appointed in May 2017.

Over the last year, Republicans on the Judiciary and House Oversight and Government Reform panels have brought in a series of officials and said after the closed-door meetings that there is ample evidence of bias. The investigation's most public moment was a 10-hour hearing in which former FBI special agent Peter Strzok defended anti-Trump texts he sent to a colleague as he helped lead both investigations. Strzok defiantly fought with angry Republican lawmakers in a riveting hearing that featured Strzok reading aloud from his sometimes-lewd texts and Democrats openly yelling at their GOP counterparts.

Comey, who has testified publicly on Capitol Hill about both the Clinton and Russia investigations, balked at the subpoena because he said committees were prone to selectively reveal information for political purposes.

The Republican chairman of the House Judiciary Committee, Virginia Rep. Bob Goodlatte, decried Comey's use of "baseless litigation" and called it an "attempt to run out the clock on this Congress," a reference to the few weeks left before Democrats take control. Both Goodlatte and South Carolina Rep. Trey Gowdy, the chairman of the Oversight panel, are also retiring at the end of the year.

A transcript of the interview will be released "as soon as possible after the interview, in the name of our combined desire for transparency," Goodlatte said.

A Justice Department watchdog report released in June said Comey was "insubordinate" in his handling of the Clinton email investigation in the explosive final months of the 2016 campaign. But it also found there was no evidence that Comey's or the department's final conclusions were motivated by political bias toward either candidate.

The report said the former FBI director, who announced in July 2016 that Clinton had been "extremely careless" with classified material but would not be charged with any crime, repeatedly departed from normal Justice Department protocol. Yet it did not second-guess his conclusion that Clinton should not have been prosecuted, despite assertions by Trump and his supporters that anyone less politically connected would have been charged.