'Kill him with his own gun': DC Metropolitan Police describe facing the mob at the Capitol

Three officers described their experience fighting a mob of President Donald Trump's supporters who'd invaded the Capitol in an insurrection unheard of in modern American history.

WASHINGTON -- As DC Metropolitan Police Officer Michael Fanone lay on the ground at the US Capitol building, stunned and injured, he knew a group of rioters were stripping him of his gear. They grabbed spare ammunition, ripped the police radio off his chest and even stole his badge.

Then, Fanone, who had just been Tasered several times in the back of the neck, heard something chilling that made him go into survival mode.

"Some guys started getting a hold of my gun and they were screaming out, 'Kill him with his own gun,'" said Fanone, who's been a police officer for almost two decades.

Fanone, one of three officers who spoke with CNN, described his experience fighting a mob of President Donald Trump's supporters who'd invaded the Capitol in an insurrection unheard of in modern American history.

Federal officials have said the details of the violence that come out will be disturbing.

"People are going to be shocked by some of the egregious contact that happened in the Capitol," acting US Attorney Michael Sherwin said Tuesday in reference to attacks on police officers.

Fanone, a narcotics detective who works in plain clothes, heard the commotion at the Capitol and grabbed his still brand-new police uniform that had been hanging in his locker and put it on for the first time, he said. He raced to the building with his partner and helped officers who were being pushed back by rioters.

But Fanone, who said he'd rather be shot than be pulled into a crowd where he had no control, was suddenly in his biggest nightmare as an officer. And in those few moments, Fanone considered using deadly force. He thought about using his gun but knew that he didn't have enough fire power and he'd soon be overpowered again, except this time they would probably use his gun against him and they'd have all the reason to end his life.

"So, the other option I thought of was to try to appeal to somebody's humanity. And I just remember yelling out that I have kids. And it seemed to work," said the 40-year-old father of four.

A group within the rioters circled Fanone and protected him until help arrived, saving his life.

"Thank you, but f*** you for being there," Fanone said of the rioters who protected him in that moment.

Fanone's anger and frustration was a sentiment felt by law enforcement around the country, furious that Trump supporters had breached the grounds of the Capitol on the very day Joe Biden's win was confirmed by the House and Senate.

Fanone's dramatic encounter with the Trump supporting rioters was repeated all over the grounds of the US Capitol as law enforcement officers battled to push them back. Fanone, one of scores of officers who were injured in the brutal battle, shared his story for the first time, still suffering the effects of a mild heart attack.

Since the breach of the Capitol, investigators have been dissecting every aspect of the day's events, from the response of US Capitol Police to the nationwide manhunt for everyone involved.

Investigators are now looking into the notion that here was some level of planning, with enough evidence to indicate that it was not just a protest that got out of control, law enforcement sources tell CNN.

"Certainly some things that we saw on the ground were some indication that there were some coordination going on, but I think as we get further into the investigation, a lot of that will be revealed," acting MPD Chief Robert Contee told reporters Thursday.

Fanone said the rioters had weapons, either of their own or taken from his fellow police.

"We were getting chemical irritants sprayed. They had pipes and different metal objects, batons, some of which I think they had taken from law enforcement personnel. They had been striking us with those," said Fanone, who added that he wasn't going to be sitting at a desk while an insurrection was happening at the Capitol.

"And then it was just the sheer number of rioters. The force that was coming from that side," he added. "It was difficult to offer any resistance when you're only about 30 guys going up against 15,000."

Officer Christina Laury, a member of the Metropolitan Police Department's gun recovery unit, got to the Capitol at around 12:30 p.m. ET and saw the riotous groups gaining ground.

Laury, who was guarding the line to make sure there were no gaps for anyone to slip through, was hit with a much stronger type of pepper spray that's supposed to be used only on bears, she said.

"The individuals were pushing officers, hitting officers. They were spraying us with what we were calling, essentially, bear mace, because you use it on bears," she said.

"Unfortunately, it shuts you down for a while. It's way worse than pepper spray," Laury added. "It seals your eyes shut. ... You've got to spray and douse yourself with water. And in those moments it's scary because you can't see anything and have people that are fighting to get through."

She was lucky enough not to be struck with anything but saw others beaten with objects.

"They were getting hit with metal objects. Metal poles. I remember seeing pitchforks. They're getting sprayed, knocked down," said Laury, who added that reinforcements kept rotating in so others could rest during the hours-long battle.

"Just pulling officers back to heal up and (reinforcements) stepping in to get to the front line. And then they go down and more officers step in and the officers that were knocked down, they're better again and they're just battling because the bottom line is, we're not letting anyone through."

'He was practically foaming at the mouth'

Officer Daniel Hodges was one of those officers who tried to battle back rioters but was roughed up in the fight. Hodges gained notice after footage of him circulated being crushed by a door. The 32-year-old officer is seen in the clip with blood dripping through his teeth as he kept gasping for enough air so he could yell "Help" at the top of his lungs.

Hodges raced to the Capitol to offer support like many others and soon found himself being assaulted from an angry mob that, he said, believed they were patriots.

"There's a guy ripping my mask off, he was able to rip away the baton and beat me with it," said Hodges, who was stuck in the door and added that his arm was bent before they ripped the weapon away.

"He was practically foaming at the mouth so just, these people were true believers in the worst way."

Hodges was eventually rescued by other officers who eventually came to his aid.

"You know things were looking bad," said Hodges, who miraculously walked away with no major injuries and may have suffered a minor concussion. "I was calling out for all I was worth, and an officer behind me was able to get me enough room to pull me out of there and get me to the rear so I was able to extricate myself."

This was Hodges's first visit to the Capitol building.

The patrol officer said he had been hearing about the possibility of violence for years so he wasn't surprised that the rioters would storm the Capitol. What did surprise him was how the insurrectionists thought the police would be on their side.

"Some of them felt like we would be fast friends because so many of them have been vocal," Hodges said. "They say things like, 'Yeah, we've been supporting you through all this Black Lives Matter stuff, you should have our back' and they felt entitled."

He added, "They felt like they would just walk up there and tell us that they're here to take back Congress and we would agree with them and we'd walk in hand in hand and just take over the nation. But obviously that's not the case and it will never be the case."

Now, only days before Biden's inauguration, federal authorities are warning of other threats that may come.

DC Mayor Muriel Bowser has publicly warned people not to come to the city for the inauguration.

Hodges echoed her sentiments, and wanted not only residents, but Trump supporters and extremists to stay home too. But with one caveat.

"Stay home. Stop this," said Hodges. "On the other hand, I hope they're caught. Let's leave it at that." 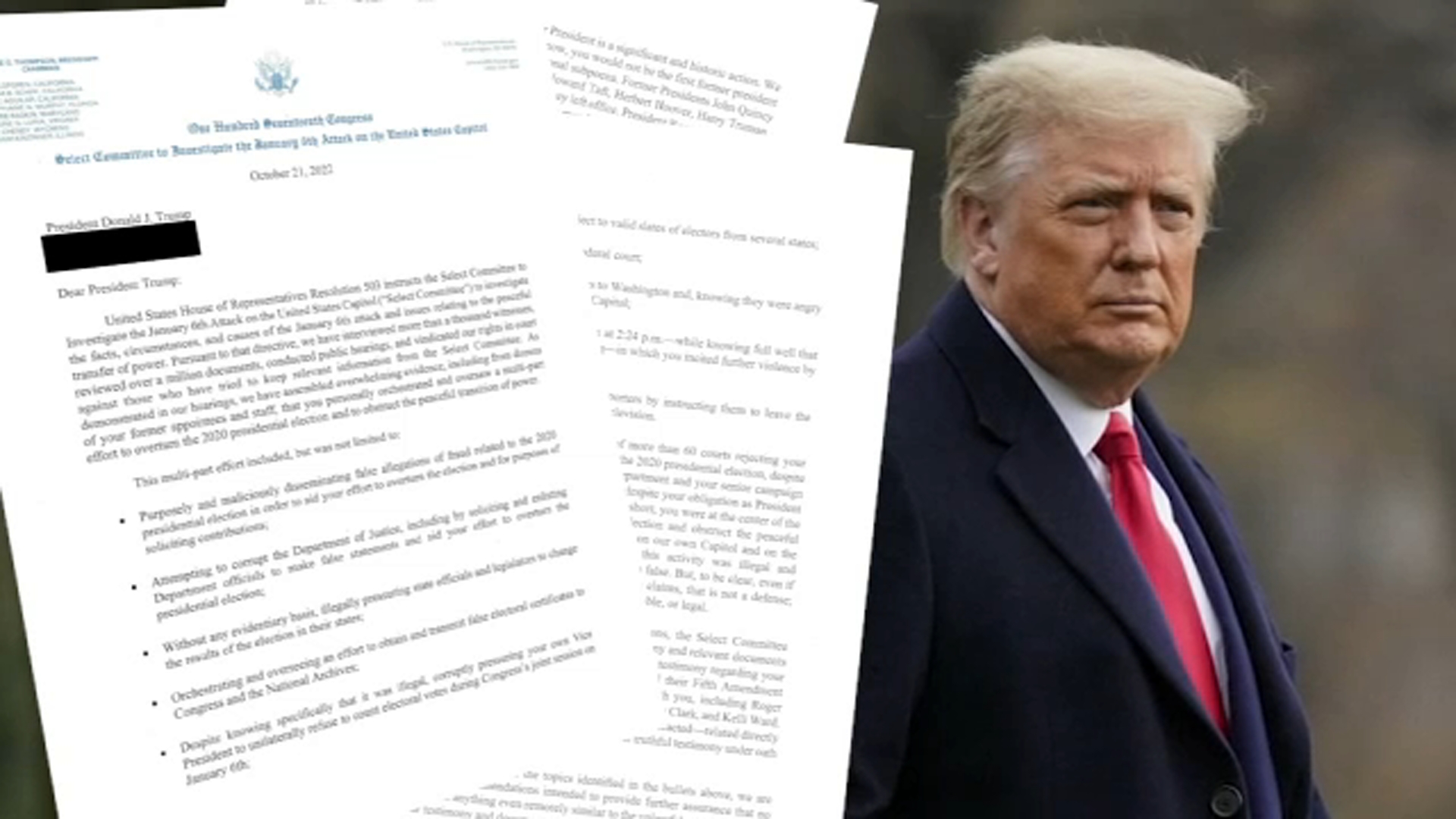 Jan. 6 committee drops Trump subpoena as it winds down

Over 2,600 dead after powerful earthquake rocks Turkey and Syria