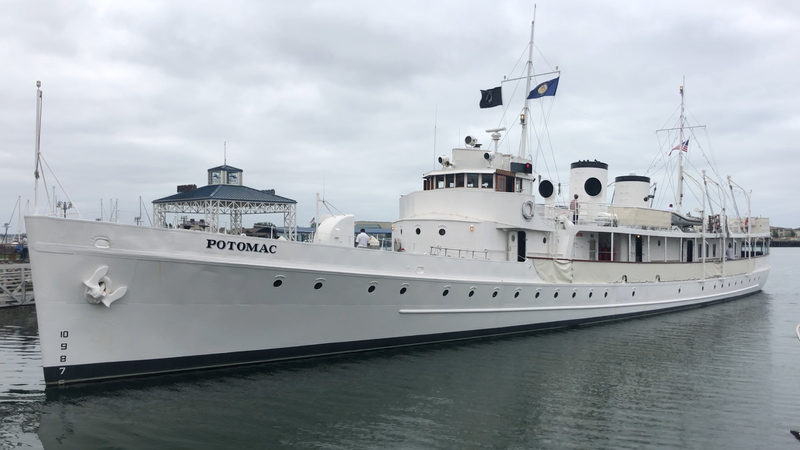 OAKLAND, Calif. -- Franklin D. Roosevelt's USS Potomac is a must-see landmark for all history lovers who want to cruise the San Francisco Bay in presidential fashion.

The Potomac Association is a nonprofit educational organization dedicated to preserving Roosevelt's history and love for his presidential yacht.

This attraction is for tourists and locals who want to experience the breathtaking views and landmarks the San Francisco Bay has to offer.

The cruise operates by offering dockside tours or by offering a two to three-hour-long educational cruise that highlights the bay's lighthouses, islands, bridges and stellar views.

The USS Potomac has quite the colorful history. Formerly known as the Electra, it was built in 1934 and was originally used as a U.S. Navy Vessel for the United States Coast Guard.

"It was designed to run up and down the East Coast of the United States and intercept rum runners," said Steven Teel, docent of the Potomac Association. "In 1935, it was taken and remodeled for the use of the president of the United States.This was the presidential yacht the Franklin Delano Roosevelt and it was so important to him that he wanted to be on board on this ship as much as he possibly could."

The vessel was reconstructed to fit the needs of President Roosevelt, who was confined to a wheelchair after being diagnosed with polio. The ship added a boat deck level with teak decking and re-channeled the exhaust from the ship's generators to convert a forward smoke stack into a block and pulley elevator, so the president could enjoy all levels of the ship.

Sailing on the USS Potomac was used as a vessel to get away and decompress from the 15-hour work days and duties of being the president of the United States. On the ship, the president enjoyed collecting postage stamps, playing poker and watching movies.

"Typically, late on a Friday, he would board the Potomac and would sail down the Potomac River into the Chesapeake Bay and find a fishing spot," said Teel. They would anchor and spend Friday night, Saturday night, and be back by late Sunday. He would board the ship and do his deep sea fishing on those occasions in Florida waters or in the Gulf in New Orleans."

The Potomac would cruise along the Atlantic Coast from Maine to the Caribbean, waiting for the president to board. The president established great relationships and alliances with prestigious guests such as King George VI, Queen Elizabeth and many more.

"The work continued. The work never stopped but it gave him a chance to unwind," said Teel. "The sea planes would land and one of the Christ Crafts will pick mail pouches and they would sort through the mail trying to keep his work down to two hours. He would always be conducting business at a time where crucial decisions where being made regarding the Depression and the war."

After the death of Roosevelt in 1945, the USS Potomac was purchased by several owners.

"Over the years, it hadn't been taken care of very well. They sold the ship to the state of Maryland and had it up until almost 1960," said Teel. "Eventually, a company called Hydro-Capital bought it in order to take it to the West Coast and put it on display at Seattle's World Fair to publicize their company and it barely made it through the Panama Canal and it was clear that it wasn't going to make it to Seattle."

Hydro-Capital was willing to sell the Potomac for scraps until the mother of a famous rock-n-roll legend refused to let that happen.

"Elvis Presley's mother found out and she hit the ceiling. Anyone of the generation knew how important this ship was to Franklin Roosevelt," said Teel. "Her son (Elvis) bought the ship and eventually he gave it to Danny Thomas to auction off and raise money for St. Jude's Hospital."

In 1981, the USS Potomac was used as a drug cover up and the Federal Reserve System towed the ship to Clipper Cove on Treasure Island. The ship was in such poor condition that it started to sink into the bay.

"Eventually it was towed to the Port of Oakland and was auctioned off," said Teel. "The port made the first bid and no one else bid on it, so the port ended it up stuck with it."

"By 1995, the restoration was complete and we have been sailing ever since," said Teel. "We are very grateful for anyone who will enjoy the bay the way that can only be done on here with such historic value."