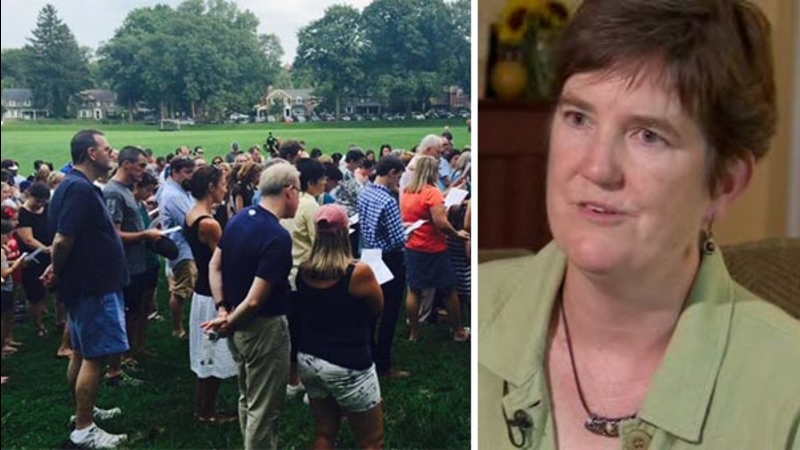 LOWER MERION TWP., Pa. (WPVI) -- The head of the Archdiocese of Philadelphia is weighing in on the firing of teacher from a Montgomery County Catholic school, who allegedly lost her job because of her same-sex marriage.

Margie Winters says she lost her job as the religious education director at Waldron Mercy Academy because of her marriage to Andrea Vittori.

More than 100 people gathered together in support Winters at General Wayne Park in Lower Merion Township on Sunday afternoon.

"I'm here to support Margie and let her know what was done to her was unjust, discriminatory and unfair," said Anthony Arechavale, parent.

"I think it's a shame she was fired because she's such a great influence on all our lives," said Stella Peterson.

She says a parent recently found out about her marriage and complained to the school's trustees.

When Winters wouldn't resign, she told Action News last week that she was then fired.

Supporters say they don't expect this from a school that teaches mercy.

"I think it's good that she loves who she wants to love and that she's happy, that's all I care about," said Katie Dewey, 7th grader.

Dolan, who taught at another school run by the sisters of Waldron Mercy, wants to know who's really behind the firing. 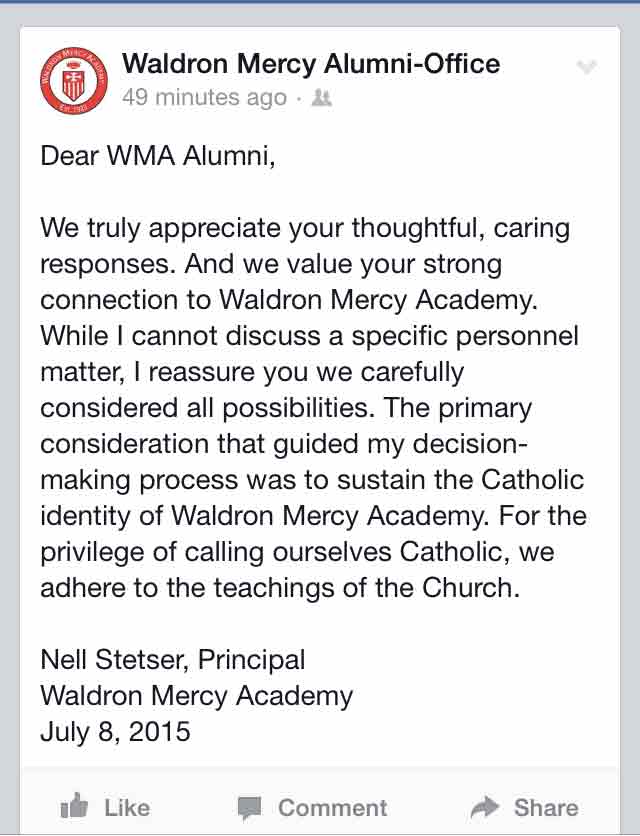 The school's principal released a letter which said, in part, "Our school recognizes the authority of the Archbishop of Philadelphia, especially in the teacher of religion to...to continue as a Catholic school, Waldron Mercy must comply with those teachings."

But the Archdiocese of Philadelphia said Waldron Mercy is a private Catholic school and personnel decisions are made without the oversight of the Archdiocese.

On Monday, Archbishop Charles Chaput released a statement, which reads: "Schools describing themselves as Catholic take on the responsibility of teaching and witnessing the Catholic faith in a manner true to Catholic belief. There's nothing complicated or controversial in this. It's a simple matter of honesty. I'm very grateful to the Religious Sisters of Mercy and to the principal and board members of Waldron Mercy for taking the steps to ensure that the Catholic faith is presented in a way fully in accord with the teaching of the Church. They've shown character and common sense at a moment when both seem to be uncommon."

Meanwhile, support for Winters has poured in.

More than 9,000 people have liked the Stand with Margie Facebook page.

A GoFundMe account set up by students and parents five days ago has already collected more than $12,000.