Some homes on LBI were severely damage, and boats and other debris were seen strewn across a neighborhood.
WPVI 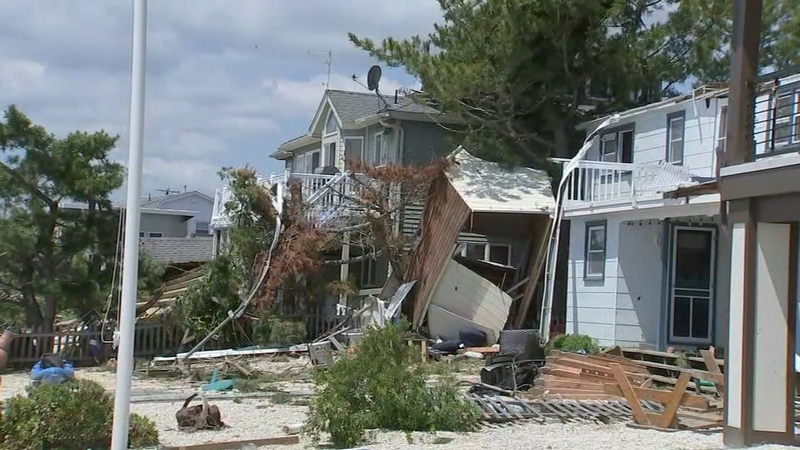 The tornado, which started in Waretown and moved toward Barnegat Light, had peak winds of up to 115 miles per hour.

On Friday morning, aerial views from the north end of Long Beach Island showed roofs were blown off multiple homes by strong winds that blew through the High Bar Harbor section.

Homes up and down Arnold Avenue were also damaged by the storm that moved over the northern end of Long Beach Island just before 9:30 p.m. Thursday.

When Lynn Rosenbauer heard the tornado warnings on local weather reports, she ran to her neighbors home. She said it was a larger house with more interior walls.

"Lynn came over with her friend and said, 'Do you mind? Can we stay in your house? I'm frightened,'" said neighbor Marielaine Mammon.

From there, the group went into an interior room.

"We all went down and huddled," said Rosenbauer. "And even though we were huddled, her husband was thrown clear across the room, it came in through the garage, it was swirling. It was deafening."

"You could hear the wind. My daughter could feel the pressure," said Mammon.

When it was over they came out and saw the roof on the back of Lynn's house was gone.

"When the weather people tell you to get into an interior room on the lowest level, they mean it," she said.

Trees and wires were knocked down and boats and other debris were strewn across the neighborhood.

Officials said one person from Barnegat Light was taken to a local hospital with minor cuts. Some other minor injuries have been reported from glass.

Crews said power had been restored to most residents by Friday evening.

RELATED: Bucks County residents hunkered down during storm: 'It sounded like a bomb went off'
EMBED More News Videos

Another tornado touched down in the Cedar Bridge area of Barnegat Township on Thursday evening. That tornado had winds of 100 to 105 miles per hour.