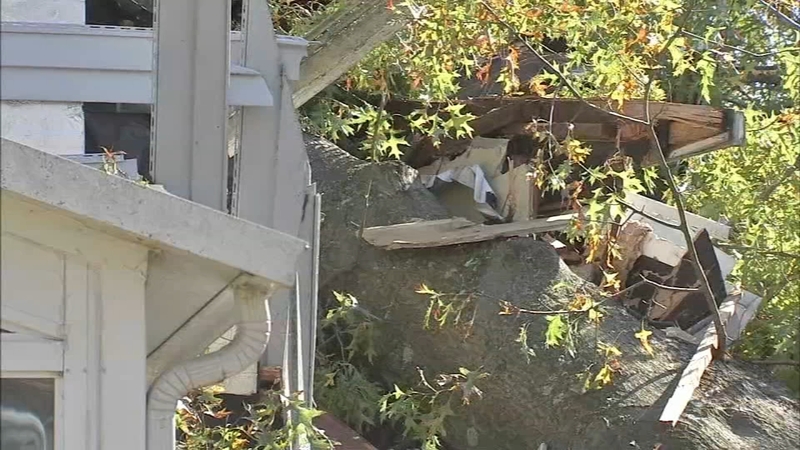 Couple rescued after tree falls on their Montco home

The National Weather Service has confirmed an EF2 tornado touched down in Thornbury Township, Delaware County.

The storm also caused some SEPTA service lines to be suspended or delayed on Friday. For the latest information, visit SEPTA.org.

Crews spent more than an hour trying to get to an elderly couple after a large tree fell onto their home in Ambler, Montgomery County.

The couple was asleep around 11:30 p.m. when the massive tree came crashing down on the back of the house on the 100 block of Tennis Avenue.

Family members called for help saying the couple, a 70-year-old and 80-year-old, was trapped on the second floor.

Firefighters faced a long and arduous task, working in the pouring rain with winds of 35 to 45 miles an hour.

They used a crane to help with the rescue.

Before even going into the house, they had to make sure the first floor was safe.

It ended up taking an hour and a half to rescue the couple from the second floor.

The couple was later identified as Percy and Francis Cupid.

Officials said Percy remains in the hospital recovering from a leg injury resulting from the falling tree.

The storm caused a lot of limbs to fall along Butler Pike and knocking out traffic lights in that area of Ambler.

A police officer told Action News there were wires down at Skippack and Butler pikes in Bluebell.

A car crashed into a tree that came down during the storms in the Roxborough section of Philadelphia.

Police said the driver didn't see the tree on the 7900 block of Henry Avenue until it was too late.

Fortunately, the driver was not seriously injured.

Power lines brought down in Warminster, Pa.: as seen on Action News at Noon, November 1, 2019.

Several utility poles and power lines in Bucks County were brought down by the strong winds.

Chopper was over Street Road in Warminster on Friday afternoon.

Dozens of neighbors were evacuated from an apartment building in Warrington, Bucks County.

Police said strong winds brought down trees onto the roof of the Park of Westminster Apartments.

The Red Cross is offering aid to everyone displaced.

The Norristown High Speed Line service is suspended between Radnor Station and Norristown Transportation Center until further notice due to weather related issues. The line will operate between 69th Street and Radnor Station.

A family was inside their Horsham home when a tree fell onto the backside of it.

It happened on the 200 block of Diane Avenue.

An Action News viewer took video from Moreland Road in Abington, just as those storms moved through around 11:30 p.m.

Even from inside their car, you can hear the powerful winds and strong rain.

Then, the power suddenly goes out, and the driver is in near-pitch darkness.

A driver had a close call in Drexel Hill, Delaware County.

A large tree branch came crashing down in front of the van.

It happened on Township Line Road, a few blocks from State Road.

Police said the large branch fell in the road, and the driver wasn't able get out of the way.

No one inside the van was injured.

The heavy rains left several drivers in the Lehigh Valley in need of rescue.

The Action Cam was outside the South Mall along Lehigh Street in Allentown where two vehicles were stuck in flood waters.

The storms also caused minor flooding on the Schuylkill Expressway.

Drivers were forced to avoid the right lane on the eastbound side near the Gulph Mills exit.

The water has since receded.