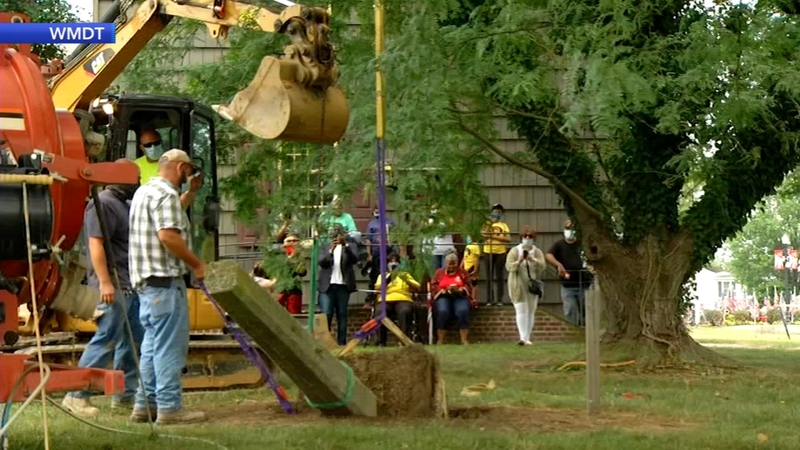 GEORGETOWN, Delaware (WPVI) -- An eight-foot tall whipping post has been removed from outside the Sussex County Courthouse in Georgetown, Delaware.

The Division of Historical and Cultural Affairs (HCA) said the post had been used to bind and whip people for crimes up until 1952, with African Americans being punished disproportionately.

The post was removed Wednesday morning after an hour and a half of excavation.

UPDATE: After an hour and a half of excavation, the whipping post has been removed from the Sussex County Courthouse in Georgetown, Delaware. https://t.co/6DjNMEpcoU pic.twitter.com/Cr5iYJ8Ql9

It was being moved to an HCA storage facility.

"It is appropriate for an item like this to be preserved in the state's collections, so that future generations may view it and attempt to understand the full context of its historical significance," said HCA Director Tim Slavin. "It's quite another thing to allow a whipping post to remain in place along a busy public street - a cold, deadpan display that does not adequately account for the traumatic legacy it represents, and that still reverberates among communities of color in our state."

The HCA said they will work with historians, educators and leaders of the African American community in Delaware to explore plans for future display of the post in a museum setting, where it can be properly contextualized and interpreted.

Delaware was the last state to abolish the whipping post, removing the penalty from state law in 1972.

The removal of the last standing whipping post in the nation comes as calls for other statues and monuments being taken down across the country.