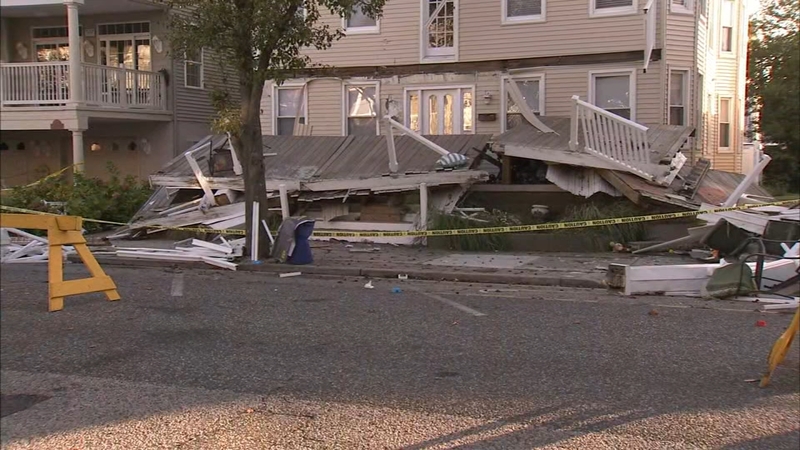 At least 22 injured after deck collapses in Wildwood, New Jersey

WILDWOOD, New Jersey (WPVI) -- At least 22 people were injured, including children, on Saturday evening when a deck collapsed at a home in Wildwood, New Jersey.

The collapse happened in the 200 block of East Baker Avenue at about 6 p.m., authorities said. Numerous emergency crews were on the scene.

According to officials with Cape Regional Health System, 21 people were being treated for injuries at their facility.

By early Sunday morning, a spokesperson for the hospital said 19 patients, including three children, had been treated and released.

At least one additional person was taken to AtlantiCare Regional Medical Center in Atlantic City.

Neighbor Diane Hollenbeck says she watched it happen. The former trauma nurse says she immediately ran over to help.

"I don't know where I got the strength. Beams and everything-- I picked up a beam threw it out the way. Firemen were running down the street. I went into automatic mode. I mean what else can you do?" said Hollenbeck.

She says one of the initial victims trapped was a baby.

The collapse occurred during the annual firefighters convention in the beach resort town. Firefighters were likely among those hurt or trapped.

In an interview with ABC News, Chief Jon Frato of the Branchville Fire Department said he was on the second-floor deck when the collapse occurred.

"It was just chaos," said Frato. "We had a four-month-old who was being held by a female, the deck collapsed and she ended up underneath the deck with the baby under her, and we had to get the deck picked up to get her out and the baby out."

Frato also described how a second child was on a portion of the deck that did not immediately collapse and another firefighter who he refers to as "hero" climbed up and brought the child to safety just moments before that part of the deck also collapsed.

Photos and videos from the scene showed more than a dozen firefighters surrounding the debris, which was scattered in front of a home and on the sidewalk.

"I could hear people over there calling for help," said neighbor June Cheeseman.

Fire officials say it took a little more than an hour to get everyone free. They also say it may have been a blessing the fire convention was going on this weekend.

Wildwood Fire Chief Daniel Speigel said, "Because the convention was in town there were support team members in the city and they assisted with management at the scene."

Wildwood Fire Department and the city's construction office are working with the building owners, engineers and contractors to properly secure a hip-roof that is currently unsupported due to the collapse.

At least 22 people were injured, including children, when a deck collapsed at a home in Wildwood, New Jersey. George Solis repots on Actin News at 10 on Sept. 14, 2019.