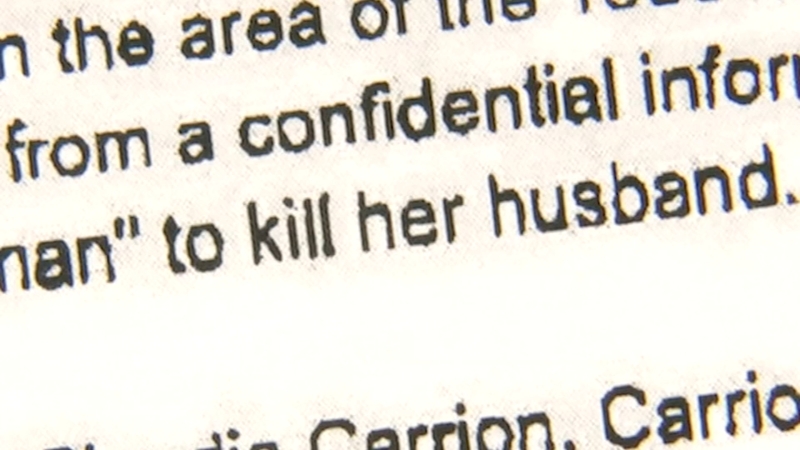 Woman twice tried to hire a hitman to kill her husband: police

ALLENTOWN, Pennsylvania (WPVI) -- A Lehigh Valley woman is accused of trying to pay someone to kill her husband not once, but twice.

Allentown resident Claudia Carrion, 44, was arrested a month ago charged with solicitation of murder.

According to court documents, a confidential informant provided police with information Claudia Carrion wanted to hire someone to kill him.

A Bucks County hunter who authorities say shot and killed a teenager at Nockamixon State Park was sentenced to prison on Wednesday.

She allegedly only was able to pay $100 upfront and offered to pay weekly installments.

"I think it's weird to have $4,000 to kill somebody," said Carrion's defense attorney, Glennis Clark. "How serious are you about that? One hundred dollars a week?"

Carrion allegedly told police after her arrest this was not her first attempt at hiring a hitman.

She told police she wanted to kill her husband because of infidelity and abuse.

The family had no comment at their home on the 1900 block of South Delaware Avenue on Friday morning.

A Pennsylvania man was arrested Wednesday on charges that he assaulted an Associated Press photographer and police officers during the Jan. 6 riot at the U.S. Capitol.

The judge set bail at $350,000. Her attorney believes that's too high because, he says, her husband is not even afraid of her.

"He didn't know anything about it until police came to him. But even so, that goes to the question of whether or not she is a danger to the community if he is not afraid of her," added Clark.