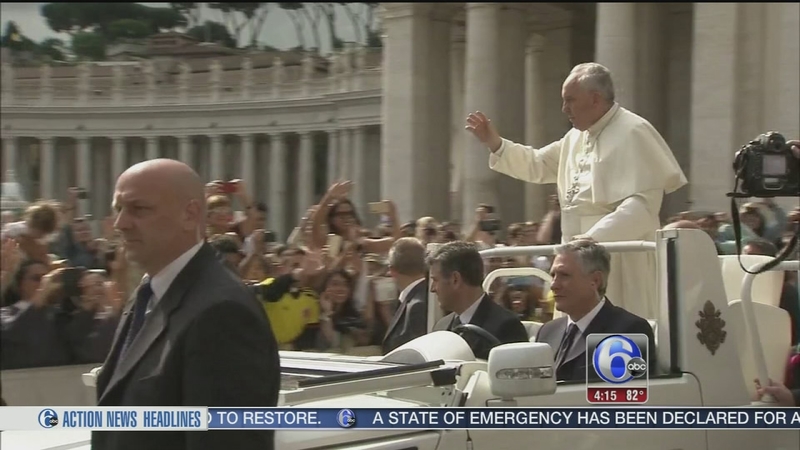 ROME (WPVI) -- Amid the roar of the faithful in Saint Peter's Square, and between occasional raindrops, Pope Francis emerged Wednesday morning for his weekly general audience.

And right there inside that crowd numbering in the tens of thousands, some 35 Philadelphians were front and center.

Philadelphia Mayor Michael Nutter tells us, "Somewhat of a surreal experience. The basilica in the background. Saint Peter's Square, how many thousands of folks out there."

Dan Hilferty, CEO of Independence Blue Cross, says, "Once everyone sees him, it's an amazing the feeling."

For some in this delegation here planning for when the Pope comes to Philadelphia, this was a second chance to personally greet him.

But unlike last year when they approached him with an invitation to attend the World Meeting of Families, today the pope approached them with a message.

The Pressman family from Pottstown, Pennsylvania just happens to be in Rome on vacation this week. For them, seeing the pope there this morning made the idea of seeing him at home that much more exciting.

Steve Pressman says, "No matter what your denomination is, it has an impact on you to be amongst, even just the pomp and circumstance, but also the religious meaning of it."

In the afternoon the delegation put on a luncheon for international journalists, highlighting Philadelphia as a global destination.

For them, this week is as much about planning for the pope as it is about telling the world about why he is coming ... and why they should to.