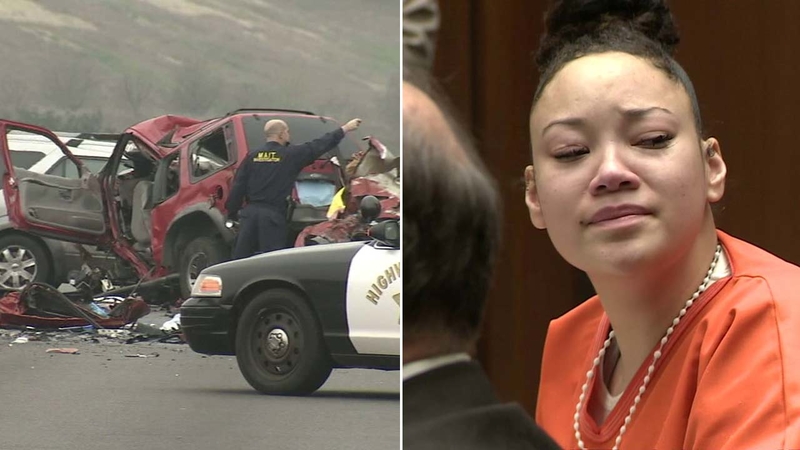 LOS ANGELES (WPVI) -- A 26-year-old Fontana woman was sentenced Wednesday to 30 years to life in prison for a 2014 wrong-way crash that killed six people on the 60 Freeway in Diamond Bar, California.

KABC-TV reports, Olivia Carolee Culbreath had been drinking when she drove against oncoming traffic on the 57 and 60 freeways at speeds of up to 100 miles per hour in the early morning of February 9, 2014, investigators said.

DUI driver Olivia Culbreath gets 30 yrs to life. Six dead including her best friend, sister and a family of four.@ABC7Courts pic.twitter.com/hw0HALbn2r

Culbreath's car slammed into a Ford Explorer on the westbound 60 Freeway, killing four people -- from three generations of the same family -- in the SUV. Two passengers in Culbreath's Camaro, including her sister, were also killed in the three-vehicle pileup.
Culbreath's blood alcohol content was measured at .15 percent about three hours after the crash, prosecutors said.

According to evidence presented at a preliminary hearing, Culbreath had previously been arrested for DUI resulting in a collision. She was warned by the court about the dangers of driving under the influence of alcohol and also was admonished that such future conduct could result in murder charges.

She was convicted in May after pleading no contest to six counts of second-degree murder.