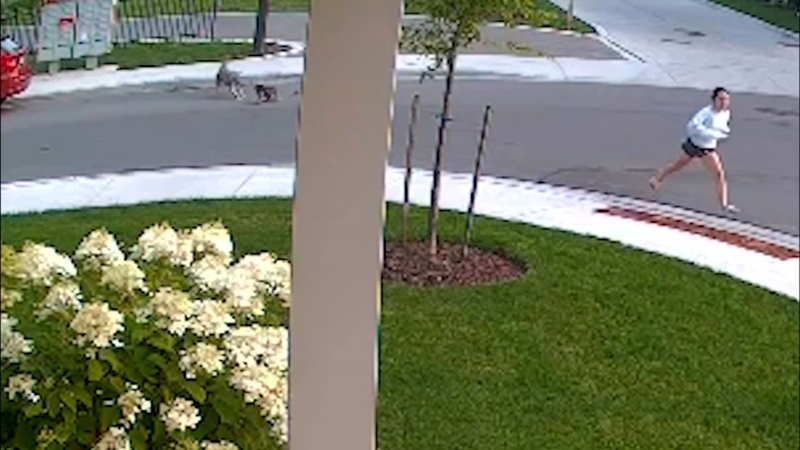 TORONTO, Ontario -- Caught on camera: A tiny dog proved its bravery while protecting its 10-year-old owner from a coyote in Toronto.

A Yorkshire Terrier, a breed that generally weighs 5 to 7 pounds, took on a wild animal several times its size, CTV News reported.

Lily Kwan screamed for help while pulling her 6-year-old rescue Yorkie by her leash. A coyote was chasing them, attacking her dog, Macy.

The 10-year-old had recently seen postings of warnings that a coyote was chasing kids in the neighborhood.

"I thought, am I next, what is going to happen to me?" Kwan said.

She said she had to drop the leash because Macy wouldn't follow her.

"I ran to the sidewalk and started screaming for help; no one heard me," Kwan said. "I just saw this coyote trying to attack my dog. I tried to ring people's door bells and knock on people's doors; this one neighbor actually let me in."

What happened next was captured on home security: You can see Macy turning around and confronting the coyote, protecting Kwan.

RELATED: Man seriously injured in alligator attack after falling off bike in Florida

"She's a super brave dog; I love her so much, and I just thought this tiny dog could protect this huge human being, trying to fight off this huge coyote," Kwan said.

Macy is in the ICU at the local vet having surgery to treat multiple puncture wounds from the wild animal.

Kwan's mom was out, but has seen the video.

"My dog would do anything for our family, so I'm actually not surprised that she did that," Dorothy Kwan said.

She said she is shocked at how bold the coyote was.

"I would never guess that a coyote, you know, would come out during the day, and especially with someone screaming and yelling it still was not fazed; it just kept coming after her and our dog, you know, despite all the yelling," Dorothy Kwan said. "It was quite aggressive."

They said there are coyote sightings in the neighborhood, but the wild animals are being tracked with electronic collars.

Dorothy Kwan said she is frustrated no one will trap them, but feels lucky Macy survived and protected her daughter.

"She's our little hero," she said.