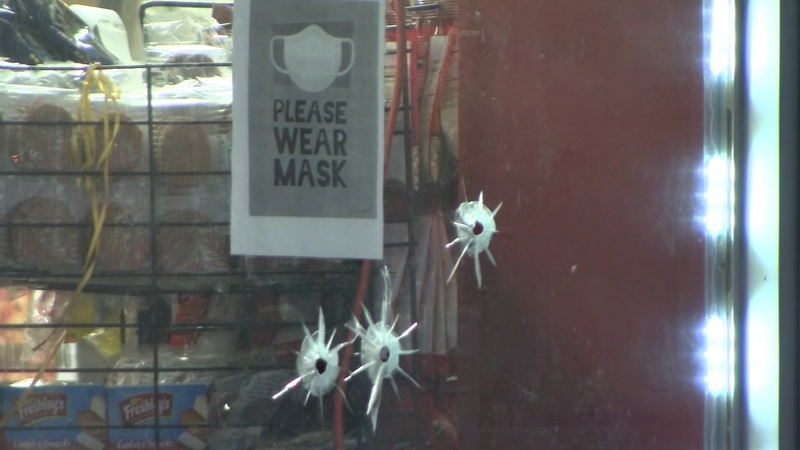 PHILADELPHIA (WPVI) -- Police are investigating a double shooting in West Philadelphia that wounded a 1-year-old child.

The shooting happened Saturday around 8 p.m. at the corner of 50th Street and Haverford Avenue.

Police say a 1-year-old girl was shot once in her left leg.

The child was transported by police to Children's Hospital of Philadelphia, listed in stable condition.

Officials say a 26-year-old man was also shot in the left forearm.

"I was walking to the store with my son, the store I always go in, all you heard was 'pow pow pow,'" said a witness. "I have a 2-year-old-son, this is not fair, this is not right."

Police say a mother was inside a corner store paying for food when the shootout erupted. Her toddler was caught in the crossfire.

"A 1-year-old child who was in her mother's arms was at the counter purchasing items from the store," said Joel Dales, deputy commissioner with the Philadelphia Police Department.

Police say three men were inside the store when a white Jeep drove by, and an unknown number of occupants fired inside the corner store.

Authorities believe the 26-year-old man inside was the intended target.

He and another man returned fire at the vehicle that got away.

"We have two guys shooting back. While you have a mother and child in the store," said Dales.

The 26-year-old man is now in custody for firing a weapon.

Police say he shouldn't have had possession of it in the first place.

"This is not OK. If this doesn't galvanize people to step up and start giving up good information as to who's carrying guns, who's using these guns on the street, I don't know what will," said Dales.

Neighbors say they are fed up.

"A 1-year-old, that don't make no sense, that's bad," said Romona Bivins, who lives in the neighborhood of the shooting.

Police say they do have surveillance video from inside the corner store, and they are looking for the vehicle that drove away.

So far, no weapons have been recovered from the scene, police say.