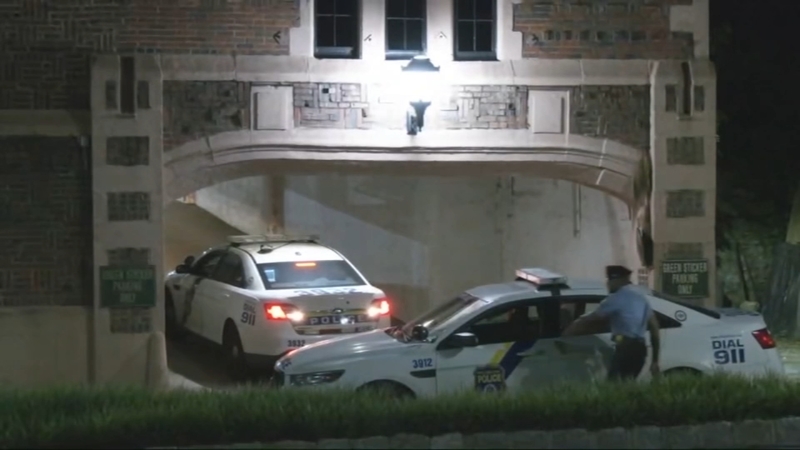 PHILADELPHIA (WPVI) -- Philadelphia police are investigating a homicide in the city's East Falls section that left a 27-year-old man dead.

The shooting happened Saturday just before 2 a.m. at the Alden Park Apartments at 5500 Wissahickon Avenue.

Police responded to reports from the apartment's gated security of gunshots coming from the second floor of the parking garage.

That's when officers discovered the 27-year-old man shot multiple times in the head and body inside a car.

He was pronounced dead at the scene, officials say.

Police say they found money thrown all over the victim's body at the scene.

Many residents of the apartment complex that Action News spoke with said they're furious.

"It's such a nice place to live, and this area here is so nice. It's just a shame that this is occurring," said Carlette Peters, from Edgewater, New Jersey, visiting her sister who lives at the complex.

Phyllis Forcina, a resident, said, "It makes me feel scared, I'm not safe anywhere in the city, and for the amount of money we pay for rent."

Some residents said they're moving out.

"It's nerve-racking for that to happen," said Seth Wilson, a resident. "I'm moving out. I just talked to my neighbor. She's leaving. I'm next. I'm going to go buy my own house."

Philadelphia has seen over 300 homicides so far this year.

To combat the growing numbers, City Council held gun buybacks at two locations Saturday, where people could turn in guns they aren't using, no questions asked.

Officials at the event say 105 guns were collected.

Attorney General Josh Shapiro was at Upper Room Baptist Church in West Oak Lane, where he highlighted how ghost guns, a gun without a serial number, have become a problem in tracing the shooters.

NOMO Foundation in North Philadelphia had been working to combat the city's growing gun violence by providing educational and safe spaces for young people.

They are part of a group of organizations asking City Council and Philadelphia Mayor Jim Kenney for more funding to curb the violence.

Part of the reason they are asking for funding is to have more satellite centers throughout the city.

"We're looking at establishing a youth organizing institute where we can find youth leaders in the community," said Luqman Abdullah, the facility administrator at NOMO.

Action News reached out to the apartment complex to find out if they plan to make any changes in response to the violence.

So far, they have not provided a response at this time.