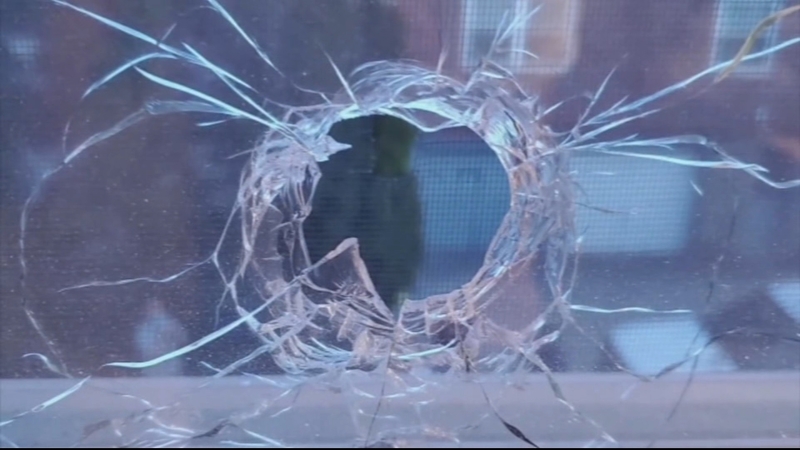 PHILADELPHIA (WPVI) -- In the span of about eight hours Thursday, there were nine shooting victims at three separate scenes in the city of Philadelphia. Two teenagers were killed.

Gunfire rang out on in the parking lot of an apartment complex on the 1400 block of N 76th Street around 3 p.m. Thursday in the city's Overbrook Park neighborhood.

The shooting claimed the lives of a 24-year-old man and a 16-year-old boy.

Police said a 30-year-old man and a 19-year-old man were also shot. Both were hospitalized in extremely critical condition.

“I got hit! I got hit!” The sound of gunfire caught on residential cameras. Seconds later you hear one of the victims of the quadruple shooting say they got hit. @6abc https://t.co/Bb6Doj7lst pic.twitter.com/RIBY232eVQ

One of the bullets struck Valerie Owen's home.

"That bullet came in and went through and hit the door. So if he was sitting there, he would have gotten shot," Owen said.

Philadelphia police say the killing of a 15-year-old boy on Tuesday night in the city's Kingsessing section appears to be a random act of violence.

"Given the number of people shot at one time... it's not only puzzling, but it leads us to believe that there are more people out here that know about what happened," said Outlaw.
EMBED More News Videos

The second shooting occurred around 7:36 p.m. when police said someone opened fire at a recreation center on the 5500 block of Christian Street.

A 16-year-old boy was killed after being shot in the back of the neck. He has been identified as Kahree Simmons.

The family, speaking outside their West Philadelphia home, urged whoever has information to take advantage of the $20,000 reward offered for information leading to an arrest and conviction.

"Kahree was loved; he didn't deserve this. He did nothing but leave the house to go play basketball with his friends. He wasn't involved in anything," said his brother, Stephen Simmons. "Like I said, we kept him out of trouble. We would take him places...we treated him like the king he is."

City, state, and federal leaders held a press conference Friday afternoon at the recreation center where Simmons died. Commissioner Danielle Outlaw said they are immediately adding more 'boots on the ground' and officers in uniform to the areas that have seen increased violence as of late.

Additionally, she said the community needs to pull together and hold the youth accountable.

"I'm asking the community. Please, please come together with us to work together with us so we can be proactive with our youth. We know where these guns are...a lot of these people know what's happening with these guns before we do," said Outlaw. "These social media beefs and arguments; people on the ground know who is arguing with one another. Please share this info with us."

Two other 15-year-olds suffered graze wounds in the shooting. Both teens are expected to survive.

Police said it's not clear if the 16-year-old was the intended target.

"My daughter is six," said nearby resident Ed Carr. "You don't want your child out here in this type of environment."

Kimberly Sciulli, who lives nearby, told Action news her son was shot three years ago.

"He didn't pass away. We can no longer blame the police systems, any other systems, we have to really get this together," Sciulli said.

The third shooting happened around 11:20 p.m. in Point Breeze.

Police said a fight broke out in a group of people on the 1900 block of Tasker Street.

Someone opened fire and a man, who was legally possessing a gun, shot back.

After the crowd dispersed, someone shot through the front window of a home hitting a 37-year-old woman, police said.

An 18-year-old man was found outside on Dickinson Street with gunshot wounds.

Both victims were stable.

Police are looking for four males in this case.

Minutes before the third shooting of the day, Mayor Kenney released his statement on Thursday's violence referencing the other two incidents.

"2021 is on track to be the most violent year we've experienced in our lifetimes. We cannot stand by as we lose an entire generation to this ongoing scourge of gun violence. We must rise up with one united voice to demand this horrific violence come to an end, and work together to achieve that goal," said Mayor Jim Kenney in a statement.

The mayor said the public briefings will begin Wednesday at noon.

No arrests have been made in connection with these incidents. Anyone with any information is asked to call police at 215-686-TIPS.

"Once again our city has been rocked by senseless gun violence. Tonight, we tragically lost a 15-year-old who had their entire life ahead of them. I extend my deepest condolences to their family during this unimaginable time. The lives of at least two other teenage victims will also never be the same, as they now have to recover from gunshot wounds that ravaged their young bodies, and face the long-term impacts of experiencing this trauma.

"Earlier this afternoon, another shooting claimed the life of one man and left others - including two teenagers - critically injured. At this rate, 2021 is on track to be the most violent year we've experienced in our lifetimes. We cannot stand by as we lose an entire generation to this ongoing scourge of gun violence. We must rise up with one united voice to demand this horrific violence come to an end, and work together to achieve that goal.

"Beginning next Wednesday at Noon, our Administration will host regular public briefings to share the strategies underway to address this public health crisis and create safe, healthy communities. We will be candid about our challenges and transparent about the solutions and resources we're bringing to bear to reduce violence across the city."
Report a correction or typo
Related topics:
philadelphiacrimegun violenceshootingviolence
Copyright © 2021 WPVI-TV. All Rights Reserved.
GUN VIOLENCE 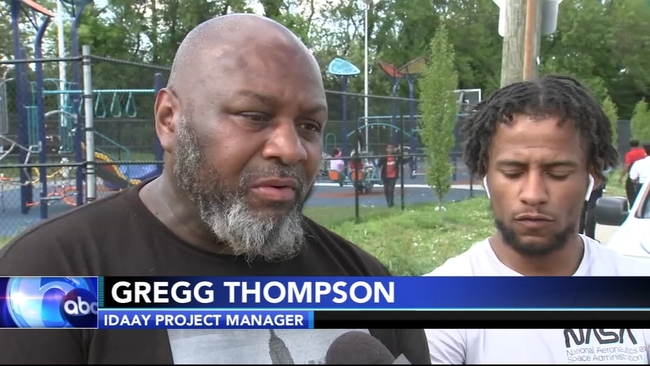