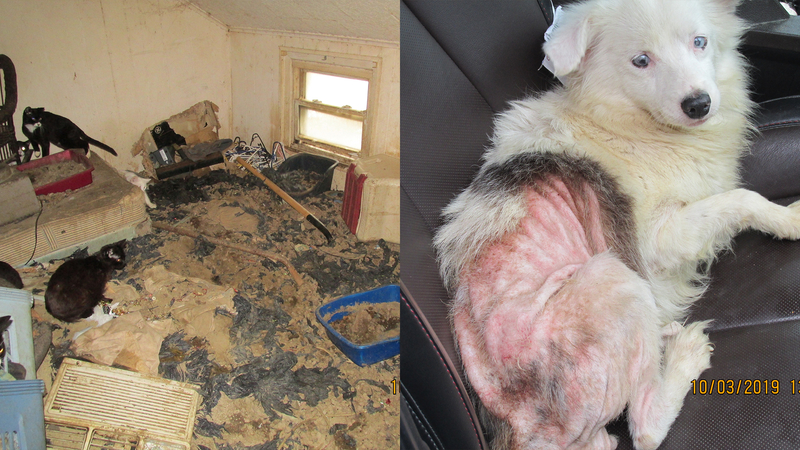 PHOENIXVILLE, Pennsylvania (WPVI) -- A total of 87 animals were removed from a home in Phoenixville after officials found them to be living in "deplorable conditions," according to the Brandywine Valley SPCA.

The animals, which included 85 cats, a dog, and the remains of a cat, were removed over two days by animal protective services officers.

Officials said there were several layers of feces covering the floors and that most of the cats were covered in fleas and had ear mites. Some also had untreated wounds.

An underweight dog was also found suffering from a skin condition that left most of her side and rear hairless, officials said. The dog also has severe dental disease and is blind.

Despite living in deplorable conditions, SPCA workers say many of the cats are well socialized and the healthiest cats will be up for adoption starting Thursday.

Animal protective services officials say they will be filing charges against the three people living at the home.

"This is a very unfortunate situation of a well-meaning cat lover getting in over her head and not reaching out for help," said Adam Lamb, BVSPCA's CEO. "There's no excuse for animals to suffer in conditions like this. We need the community to know we're here to help, and we depend on neighbors, relatives and friends to report circumstances of concern before conditions get this bad."
Report a correction or typo
Related topics:
phoenixville boroughanimal crueltyspcaanimal rescue
Copyright © 2022 WPVI-TV. All Rights Reserved.
ANIMAL RESCUE
Dog chasing groundhog gets stuck under concrete in Chester Co.
Dog left tied to fire hydrant along with note from owner
Hal the dog, found tied to tree looking like 'skeleton,' rescued
Don't buy live rabbits for Easter: 'They're not gifts, they're pets'
TOP STORIES
Father faces charges after 4-year-old accidentally shoots himself
Visitors fill the Jersey Shore for Memorial Day weekend
Pottstown community grieves over loss of family in house explosion
Police: Triple shooting leaves 1 dead in West Oak Lane
One man dead after West Philadelphia shooting
AccuWeather: Sunny & Pleasant Sunday
'Is it worth my kid?' Parents of TX school shooting victim speak out
Show More
Official admits police made 'wrong decision' in TX shooting
Victim of elementary school attack says it could have been prevented
North Philly store owner robbed, assaulted with brick: Police
Dann Cuellar retires after 34 years at Action News
Another Trenton, NJ firehouse hit by gunfire
More TOP STORIES News