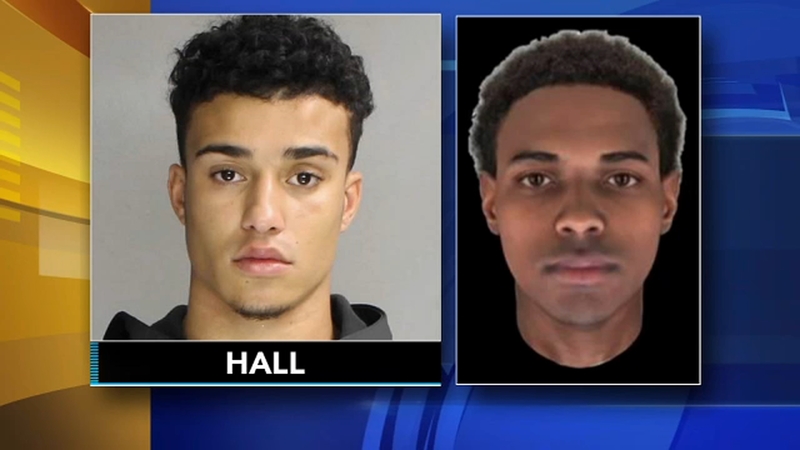 NORRISTOWN, Pennsylvania (WPVI) -- A sex assault suspect is now behind bars after allegedly attacking a 19-year-old college student at a Montgomery County park more than two years ago.

Police say the suspect was arrested after committing another crime nearby just days ago.

Investigators in Montgomery County, Pennsylvania were working with a composite sketch of the suspect developed solely on DNA evidence from the crime scene. That sketch bears a striking resemblance to the suspect, 19-year-old Mason Alexander Hall of Norristown, who has been formally charged in this case.

Montgomery County DA Kevin Steele says it took more than two years but the sketch, and some good old-fashioned investigative practiceshelped authorities break this case.
Steele says, "We were able to solve this crime and find the perpetrator using all available technology combined with solid, never give up police work."

It was the summer of 2017 when the 19-year-old victim was walking through Norristown Farm Park on a morning stroll when someone came up from behind and grabbed her.

Steele says the attacker had a semi-automatic handgun held to her right temple and was told to keep walking or she would be shot.

"The victim was forced into a secluded pasture and sexually assaulted," Steele added.

The ensuing investigation was seemingly going nowhere until the prosecutor's office sent DNA collected at the crime scene to a cutting edge lab in Virginia. There, they were able to use that DNA to develop a scientifically-based concept of what the attacker looks like through a process called "phenotyping."

It still took a lot of work linking this image to an actual person, but the trail eventually led to Mason Hall who was arrested last week.
We spoke with people walking in the park on Monday who say they are just happy and arrest has finally been made.

Sue Eason of Norristown says, "When it first happened I didn't want to come up to the park. I didn't come up for a long time, especially alone."

Catherine Lare of Plymouth Meeting adds, "It is nice knowing he is not going to be back out here doing it again to somebody else. So, it's a peace of mind."

Hall was already on police radar regarding the sexual assault when he was recently involved in another local crime. Investigators tested DNA evidence collected from that scene, and it was a match with DNA from the sexual assault two years earlier.