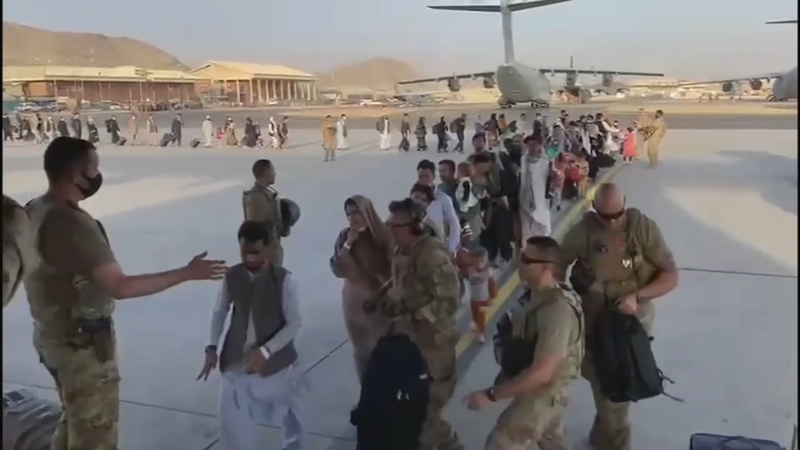 Mohammad Saghar, volunteer translator and U.N. Afghan refugee, said, "They look like so sad, they couldn't talk most of them, they're so tired."

Volunteers from all over the region converged at ground zero for one common purpose: to translate for those who have escaped.

"We did see injuries that were inflicted there, so it was very difficult to see that," said Selli Abdali, an Afghan-American medical student volunteering as a health care worker and translator.

Mohammed Sadeed worked for the U.S. Embassy before moving to Philadelphia in 2019. His family escaped from Afghanistan the day a suicide bomber killed 13 US service members and at least 170 Afghans. He said his family is still in Germany and is not sure when they will reunite in Philadelphia. He is serving as a translator at the airport.

"I am so happy," said Sadeed. "The things that are happening it's so crazy. It is chaos."

Sadeed said he hopes the U.S. allies will step in to save the people of Afghanistan.

Sayed Kalimullah Barialai Aqeli said many of his family members are in hiding and desperately trying to escape Afghanistan.

"Because of the short deadline, people are trying to get out, but there is no way," said Sadeed. "They don't have hope, so my message is they have to sit together, negotiate."

Selli Abdali is a medical student offering healthcare services and volunteering as a translator. Her mother and her two sisters-in-law spent 12 hours making Afghan meals to feed 400 people after refugees told her they had trouble eating the food upon arrival in America. Abdali's own parents were Afghanistan refugees in 1989.

"I was born here, so growing up my father wanted us to learn Pashto at home because he was like, 'you'll need this skill one day,' and yesterday and today are those days," said Abdali.

Abdali says evacuees are clearly heartbroken after leaving everything they knew behind, but she said she wants to serve as a symbol of hope.

"That's the first thing they see when they land in America, so it's like, 'Wow look, there was an Afghan girl, she spoke Pashto and she's going to be a doctor,'" explained Abdali. "That's hope and that's really what I want at the end of the day."

Many refugees are being taken to Joint Base McGuire-Dix-Lakehurst in southern New Jersey, which has a capacity for 3,500 evacuees and received 1,192 Afghans since Wednesday, according to U.S. Northern Command Commander Gen. Glen VanHerck.

The military hopes to expand the capacity there to 10,000, part of an effort to expand nationwide capacity to 50,000 by Sept. 15, VanHerck said.