The merchants at the Philadelphia Regional Produce Market are making a bet with the Hunts Point Market in the Bronx. At stake? A truckload of food to help the hungry in the winning city.

Neither side is worried.

"So we're hoping that with this little game we're playing with the guys in NY, it's putting the spotlight on the need for people to have fresh fruit and vegetables," said John Vena of the Philadelphia Regional Produce Market.

"Philly we're coming for ya. We want our load of produce to give to our favorite charity. And it's going to be time to cough it up really fast!" said Jim Margiotta of the Hunts Point Produce Market.

While all sides agree to the fruits of this cause, let's face it:

It's not all goodwill.

"I hate New York fans even more than Boston fans. So I can't wait to go up there and crush 'em!" said Mikey Verchi of Glendora, N.J.

With that mentality, you can imagine how the next part of the deal would go over.

The losing market has to wear the winning team's jerseys.

"Everyone over there is going to have to dress up in Yankees gear and take pictures!" Margiotta said. "I have a bet with my shipper he will have to walk around his office all day in Yankees stuff."

"I will burn a Yankees jersey but I will never put one on living in Philadelphia, or being a Phillies Phan," said Jason Weiss of South Philadelphia. "Never!"

We're told a truckload is ten tons, and if the Phillies win it will go to Philabundance, Philadelphia's local food bank.

Remember, you don't have to place a bet to make a difference. To donate to Philabundance, visit their website or call (215) 339-0900 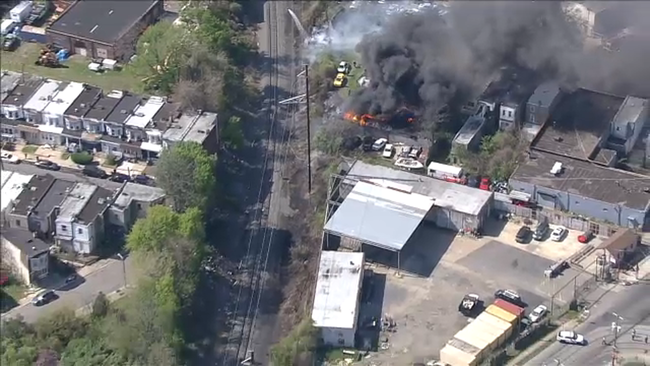 1 dead, 2 wounded in shooting at Long Island supermarket
FBI releases wanted poster for Justin Smith
Steph Curry gives jersey to Del. trooper in viral video after 76ers game
What we know about the jury in Derek Chauvin trial
Man dead following assault near Center City convention center
Show More
What do the charges against Derek Chauvin mean?
Doctor says COVID booster shots may not be necessary
Here are the COVID safety measures for Oscars attendees at Union Station
COVID-19 and travel: US warns against visiting 80% of world
Here's how Philadelphia is preparing for the Derek Chauvin verdict
More TOP STORIES News