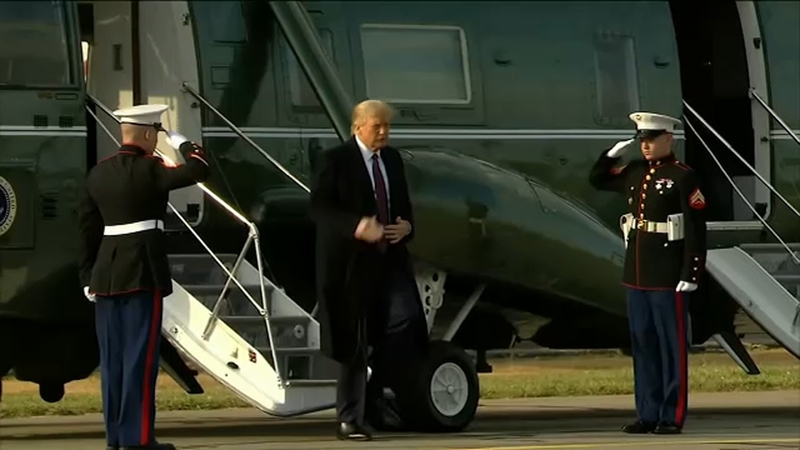 BEDMINSTER, New Jersey (WPVI) -- President Donald Trump made a stop in New Jersey Thursday for a fundraiser. Later that same day, he and the First Lady tested positive for the coronavirus.

Some are asking why the president continued traveling, even after learning one of his closest aides tested positive and symptomatic.

President Trump has been traveling all week and was seen getting out of Marine One in Washington, DC Thursday after a trip to New Jersey.

He attended a fundraiser at his Bedminster golf club.

On Friday, Governor Phil Murphy sent his best wishes to the Trumps for a speedy recovery. He also urged everyone who attended the event in Bedminster to "take full precautions, including self-quarantining and getting testing."

Statement from @GovMurphy and @FirstLadyNJ on @POTUS and @FLOTUS testing positive for Covid after their visit to NJ. pic.twitter.com/meCeT3W6pm

Hope Hicks, a longtime member of his inner circle, tested positive on Wednesday after showing symptoms.

She has been with the president this week in Ohio for the debate and Minnesota for a campaign rally.

"She is among his closest aides. They were right next to each other in that small space, Marine One, the presidential helicopter, she is in the oval office all the time in direct contact with him," Vega said. "So just in terms of the logic of the way COVID spreads, it's not surprising that he caught it."

Controversy has erupted over the endorsement of President Donald Trump by the Philadelphia firefighters and paramedics' union, Local 22.

One source told ABC News Trump did not come within six feet of guests and guests themselves were tested prior to joining the President.

The senior aides who joined the President on his trip have been close contact with Hicks in addition to the President, according to the sources.

Trump's Bedminster event on Thursday included a roundtable discussion, a photo line with the President, and a reception, according to a local New Jersey media report.

A Republican National Committee spokesperson told ABC News: "As usual, the event site was professionally cleaned and sanitized prior to the event. The White House Medical Unit and U.S. Secret Service evaluated all attendees in order for them to gain access to the event. Attendees tested negative for COVID-19 on the day of the event, completed a wellness questionnaire, and passed a temperature screening."

Video from the Facebook group Somerset County for Trump shows supporters gathered in close proximity outside his golf club Thursday with most not wearing masks.

That is something President Trump and the First Lady are rarely spotted wearing themselves.