Once the snow was in the forecast, head coach Brian Delallo tweeted the announcement to his players.
WPVI
By 6abc Digital Staff 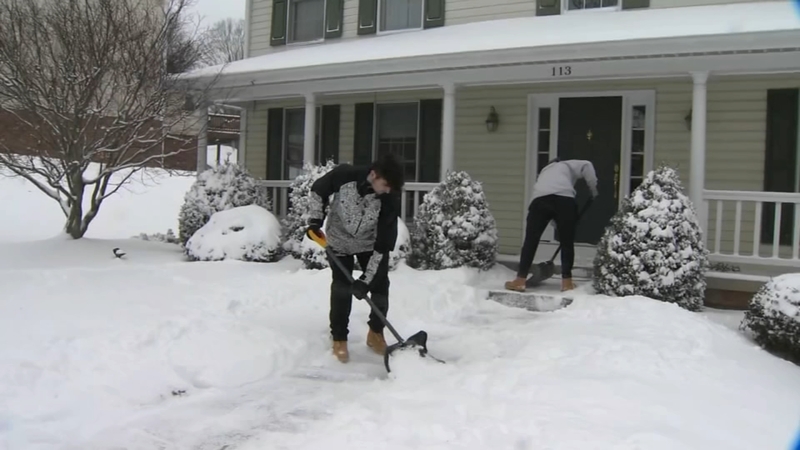 PITTSBURGH, Pennsylvania (WPVI) -- A high school football team near Pittsburgh was told their weightlifting session was canceled, but their workout - which now involved shovels - was not.

Bethel Park High School football players typically meet in the workout room at 9 a.m. when school is closed, but when a snowstorm barreled through the neighborhood earlier this week, their practice moved outdoors.

Once the snow was in the forecast, head coach Brian Delallo tweeted the announcement to his players:

"Due to expected severe weather, Monday's weightlifting workout has been cancelled. Find an elderly or disabled neighbor and shovel their driveway. Don't accept any money - that's our Monday workout."

Due to expected severe weather, Monday’s weightlifting workout has been cancelled. Find an elderly or disabled neighbor and shovel their driveway. Don’t accept any money - that’s our Monday workout.

Delallo said first thing on Monday morning, his players were texting photos of each other clearing driveways, one after another.

"It's great to see the kids buy-in and get out there. They'll shovel all morning and then, hopefully, they'll go sled-riding in the afternoon and get to be kids," Delallo told affiliate WTAE.

"It's great to see the kids buy-in and get out there. They'll shovel all morning and then, hopefully, they'll go sled-riding in the afternoon and get to be kids," the coach told affiliate WTAE.

"It is nice getting out here at helping the community," said Braedon Del Duca, a guard and tackle on the team. "We love to do it for everybody that we can."

Del Duca said this was their chance to thank the community for their support all season.

Colton Pfeuffer, a wide receiver and safety, said he and Del Duca realize just how much of this workout change was helping everyone when they knocked on one specific homeowner's door.

"She was excited. She asked how much it was. We said, 'It was free of cost,' and she was all excited and thankful for it. It was just nice to see that," Pfeuffer said.

That homeowner said she will pay it back by donating to the school's football program, adding to their lesson.

"It's about community. We talk about in our program all the time, so this is another chance we have to go out and interact with our community in a positive way and show them that they're important to us," Delallo said.

After his original tweet became headline news, Coach Delallo sent a follow-up message, saying it received "much more attention than we ever expected" and giving credit where credit is due.

Delallo tweeted, "I must give any credit for the idea to Jeff Metheny, who was Head Football Coach at Bethel Park for 25 years before me. We are simply carrying on 1 of the many great traditions he established. Thanks, Coach Metheny!"
Report a correction or typo
Related topics:
educationpennsylvaniasnowhigh school footballfeel good
Copyright © 2022 WPVI-TV. All Rights Reserved.
HIGH SCHOOL FOOTBALL
Eagles nominate Chester coach for high school coach of the year
6abc High School Huddle: Thanksgiving edition
High School Huddle for 11/19 and all of the weekend scores
High School Huddle for 11/12 and all of the weekend scores
TOP STORIES
AccuWeather Alert: Drenching Downpours Tonight
Officials ID 5 killed in Pottstown explosion; most were children
Official admits police made 'wrong decision' in TX shooting
Victim of elementary school attack says it could have been prevented
Police: Store owner robbed, assaulted with brick in North Philly
Dann Cuellar retires after 34 years at Action News
Another Trenton, NJ firehouse hit by gunfire
Show More
Rainy start to Memorial Day weekend at the Jersey Shore
Bank employees help kidnapped woman after she asks for loan
Massacre survivor says gunman told them: 'You're all gonna die'
4th grader 'did what she had to to survive' Uvalde shooting, aunt says
North Penn holds farewell parade for retiring superintendent
More TOP STORIES News