PHILADELPHIA (WPVI) -- The news scrolled on the ticker outside Temple University's Lew Klein College of Media and Communication on Monday reporting the unexpected death of 65-year-old Bob Saget. 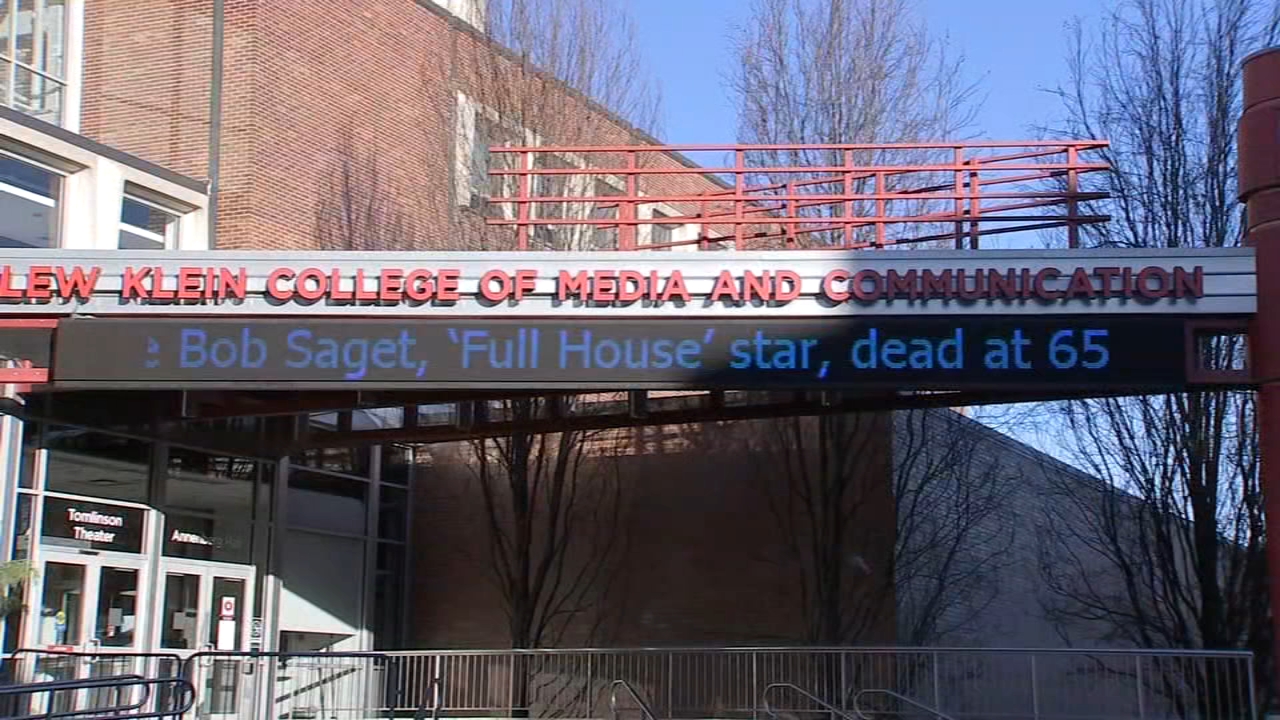 The famed television personality was born in Philadelphia on May 17, 1956, to Benjamin, a supermarket executive, and Rosalyn, who worked in hospital administration.

He was raised in Norfolk, Virginia, then moved to Encino, California, before returning back to the Philadelphia area.

He graduated Abington Senior High School in 1975. He was inducted into the school's Hall of Fame in 1991.

"We were sad to learn of the loss of a member of our Abington Senior High School alumni community, Hall of Fame inductee, Bob Saget. Our condolences go out to his family and friends."

Upon being inducted into the school's Hall of Fame, Saget credited his teachers including Mrs. Elaine Zimmerman for his success:

"When I got to [Abington], I had to make up two years of English in one, . . . Mrs. Zimmerman took me as a solo effort in her honors class and would meet with me a few times a week to discuss books she'd asked me to read. Anything by Steinbeck, Kipling, Hemingway I read, and we'd have lengthy discussions about them. Moby Dick and The Scarlet Letter I took rainchecks on.

There went my A, but she was so giving as a teacher and as a person, I can say that she is one of the greatest influences in my life so far. I used to show her Super 8mm movies I'd made and bore her with my 'creative' writing and she wound up suggesting I not go to college as a pre-med student, but study to become a comedy filmmaker. That's dangerous advice for a teacher to give a student. She even wrote in my yearbook, 'To the next Groucho-Fellini.' I haven't yet reached those goals she had helped me realize for myself, but I'm working on it." 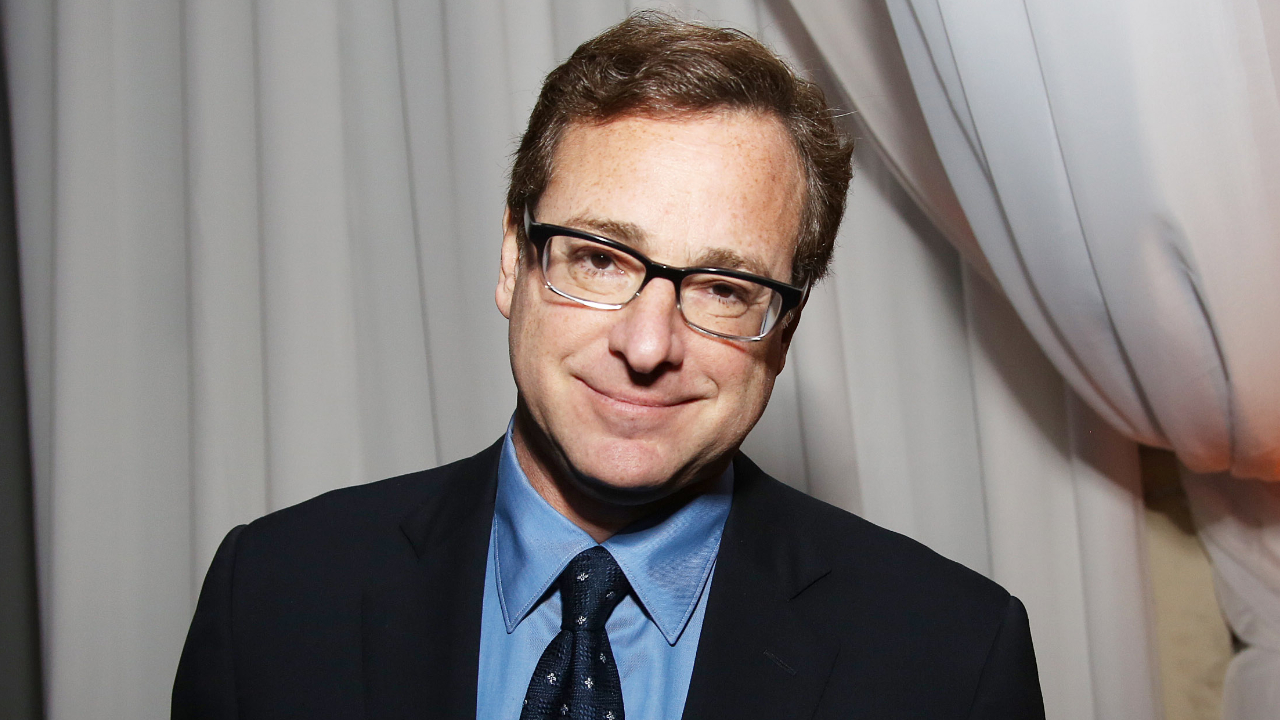 Bob Saget attends the 2nd Annual Rebels with a Cause at Paramount Pictures Studios on Thursday, March 20, 2014 in Los Angeles.

(Photo by Annie I. Bang /Invision/AP)

Saget was a 1978 alumnus of what is now the Lew Klein College of Media and Communication.

The university released this statement on the actor's death:

"Temple University is saddened to learn of the passing of Bob Saget, a deeply loyal alumnus and member of the University community. A legendary comic and star of hit shows such as "Full House" and "America's Funniest Home Videos," Saget will always be remembered as one of Temple's all-time funniest Owls. His work touched the lives of many and brought smiles to families across the globe. While Saget will be deeply missed, his legacy and overall impact on the entertainment industry will continue to be felt for years to come."

Those who knew him said his death is a huge loss for not only the Temple community but for fans across the country.

"Just a really upbeat positive happy person," said George Cummings, a former Saget classmate and current Assistant General Manager of Temple TV. "He had a great sense of humor and even at school, he had his eye on doing comedy. That's really what he wanted to do. The fact that he was starting out a tour doing stand-up is a testament to how much he loved it and how much it meant to him."

Stand-up comedian Chip Chantry recalled a funny moment before he opened a show for Saget. He says the "Full House" star called him and told he had run out of underwear and to go buy him some. It was a joke that came up for years.

"And no matter how well I did in my career after that, if anything good ever happened, he would always congratulate me and remind me that I was just the guy that bought his underwear," laughed Chantry.

Action News spoke with Temple student Gil Rosen about the loss of the famous graduate.

"Being a Klein student myself, Bob Saget also came here many years ago. It's a big loss to the Temple community for sure," Rosen said.

Saget was best known for his role as beloved father Danny Tanner on the ABC sitcom "Full House" and its Netflix sequel "Fuller House."

Saget was also a stand-up comic with a raunchy set, far different from his TV dad image. But before moving to Los Angeles and making it big, he started in our area.

Born in Philadelphia in 1956, Bob Saget graduated from Abington Senior High School in 1975 and went on to Temple University.

"We hung by the equipment room" Saget recalled.

"At Broad and Montgomery by the trucks that gave great steak sandwiches," the anchor said.

"They gave great steak sandwiches. Now, I don't go to trucks as much," Saget said.

The news scrolled on the ticker outside Temple University's Lew Klein College of Media and Communication reporting the unexpected death of 65-year old Bob Saget.

Tributes have been pouring in for Saget, who was found dead Sunday in a hotel room at the Ritz-Carlton in Orlando.

According to a preliminary autopsy report, Saget was found dead lying face up on his bed in a luxury hotel room with no signs of trauma

There were no signs of foul play, and the room itself was in order, "with items owned by Mr. Saget on the nightstand, television stand, closet and bathroom," according to the report from the Orange County Sheriff's Office.

The official cause and manner of death are still pending and the full investigation and autopsy report could take 10-12 weeks to complete.

Earlier today, deputies were called to the Ritz-Carlton Orlando, Grande Lakes for a call about an unresponsive man in a hotel room. The man was identified as Robert Saget & pronounced deceased on scene. Detectives found no signs of foul play or drug use in this case. #BobSaget pic.twitter.com/aB1UKiOlmi

Saget, who just began his "I Don't Do Negative Tour," had been traveling across the country. He was scheduled to make a stop at the Keswick Theatre in Glenside, Pennsylvania.

"As a genuine, kind, and always-funny member of our community, Bob Saget will be missed," the theatre tweeted.

As a genuine, kind, and always-funny member of our community, Bob Saget will be missed. 🖤

Mr. Saget, an Abington grad, had been scheduled to perform at the Keswick Theatre on March 18.

On Saturday night, Saget performed at the Ponte Vedra Concert Hall in Jacksonville, Florida. On Sunday morning, at 3:42 a.m., he tweeted: "Loved tonight's show @PV_ConcertHall in Jacksonville. Appreciative audience. Thanks again to @RealTimWilkins for opening. I had no idea I did a 2 hr set tonight. I'm happily addicted again to this s***. Check BobSaget.com for my dates in 2022."

Saget had daughters Aubrey, Lara and Jennifer with first wife Sherri Kramer before divorcing in 1997. He married Kelly Rizzo in 2018.