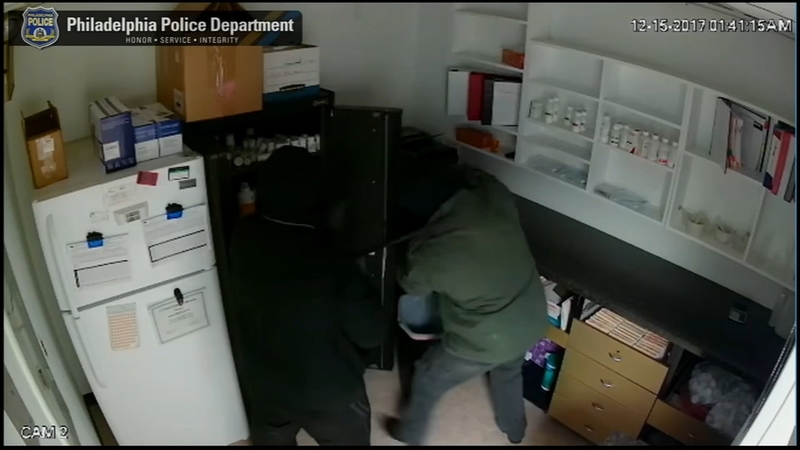 PHILADELPHIA (WPVI) -- According to authorities, it took five long years to catch up with the ring of burglars that targeted nearly 50 pharmacies near Philadelphia.

They targeted many mom-and-pop pharmacies, some that are no longer in business.

Others, like Gold's Pharmacy in Overbrook Park, have since upgraded their security measures.

"I'm shocked. I'm glad these guys are off the street," said Nina Nebeskaya, the pharmacy owner.

She had long given up that they would ever catch the men who burglarized her pharmacy on Dec. 15, 2017.

Surveillance footage shows three men wearing ski masks pillaging the place of all 10,000 opioid pills in stock. It was 2 a.m. when her alarm system triggered her phone, sending live footage of her place being burglarized.

"We see this happening live, we see our pharmacy completely torn apart. They went right to the back, took the safe apart, took all the narcotics," Nebeskaya said.

Authorities said Gold's Pharmacy was one of 49 that the burglary ring targeted in Philadelphia, Bucks, Delaware and Montgomery counties.

The indictment says the men conspired from November 2014 to April 2019 to burglarize the pharmacies.

They would hide the vehicles in garages in commercial storage lots to avoid detection by law enforcement, authorities said.

"These charges are a huge blow to this sophisticated burglary and drug distribution organization," U.S. Attorney William McSwain said.

Since the burglary, she and her business partner made major changes in security measures. They now have to see who's at the door through a camera before they buzz you in.

They also put a steel grate at the back door and a motion-activated camera that alerts her phone that someone is roaming around the back door. If she doesn't like what she sees, she can trigger lights to come on and sound an alarm.

"Unfortunately, we have to keep up to date with the safety features that we have and even though it kind of as far as patient contact it interferes but we gotta keep safe," she said.