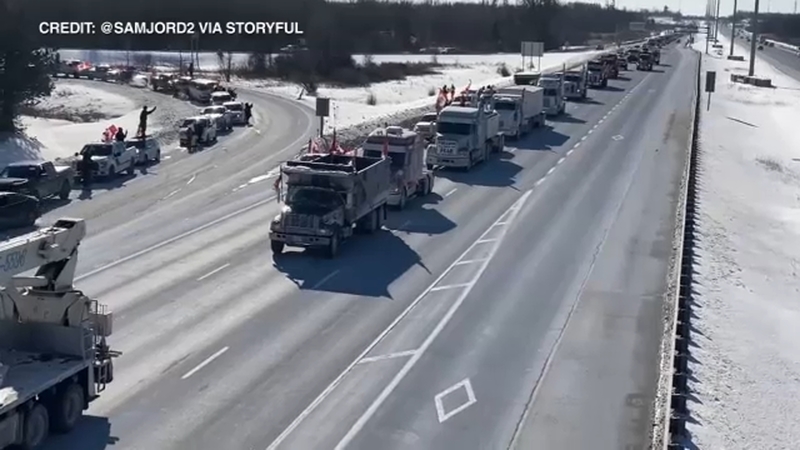 CANADA -- Lines of trucks continued to roll into Ottawa, Canada, on Saturday afternoon, January 29, to join a convoy of truckers protesting outside parliament against COVID-19 vaccine mandates for cross-border travel.

The main convoy set off from British Columbia on Sunday, January 23, and arrived in Ottawa on Friday ahead of a two-day protest scheduled in the city for Saturday and Sunday. Ottawa Police told downtown residents to "expect delays and major traffic disruptions."

As increasing numbers of vehicles tried to reach Ottawa's downtown area through the day, police began directing traffic away "to mitigate road safety issues" and asked that people do not travel the center of the city, according to Storyful.

This footage, taken on Saturday afternoon, shows dozens of vehicles traveling toward Ottawa along the Trans-Canada Highway in Kanata, a western suburb of the capital, as drivers honked their horns and were cheered by roadside supporters.

"They're not effective, they're not working. It's not changing anything. We can't keep living like this. People are losing their jobs because they don't want to get the vaccine," said Eric Simmons, from Oshawa, Ontario

While the main demonstration got underway outside Canada's House of Commons on Saturday, other, smaller convoys rallied in other Canadian towns and cities, including Vancouver, Victoria, Kelowna, Winnipeg, and Calgary.

Trudeau has said Canadians are not represented by this "very troubling, small but very vocal minority of Canadians who are lashing out at science, at government, at society, at mandates and public health advice.

Some are, in part, protesting a new rule that took effect Jan. 15 requiring truckers entering Canada be fully immunized against the coronavirus. The United States has imposed the same requirement on truckers entering that country.

The Canadian Trucking Alliance said a great number of the protesters have no connection to the trucking industry, adding they have a separate agenda to push. The alliance notes the vast majority of drivers are vaccinated.

The Parliamentary Protective Service expects as many as 10,000 protesters as part of a weekend-long rally.