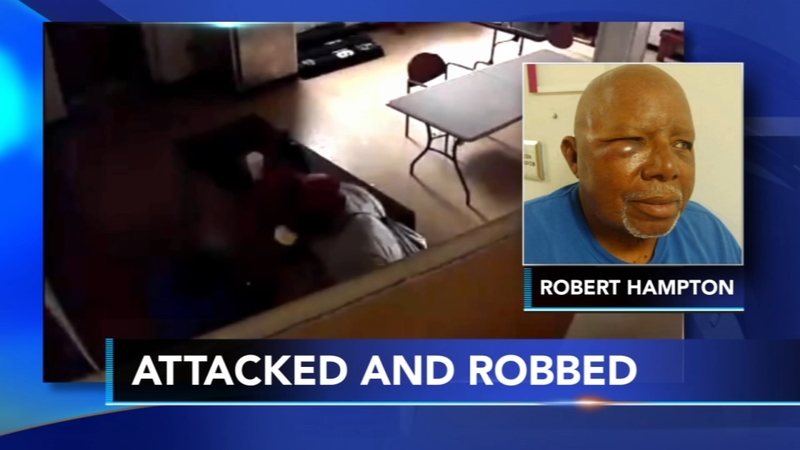 PHILADELPHIA (WPVI) -- Philadelphia police are searching for the man who attacked an elderly worker at Hunting Park Recreation Center, punching him more than a dozen times before stealing his cell phone.

The violent attack against Robert Hampton was caught on surveillance video. It happened at about 2:45 p.m. on Tuesday.

Hampton was trying to eat his lunch while working inside the rec center, but then he found himself under attack with no time to react.

That's when Hampton says the guy started unloading punches on him; 16 in total.

The attacker got away with Hampton's cell phone worth roughly $200.

Police believe the attacker is a man is in his 20s.

He even had a short conversation with Hampton pretending he was about to head to the restroom just before the attack.

"It's not something we want to happen to anybody, it's horrible, but for that to happen to a senior citizen, it's additionally alarming," said Captain Sekou Kinebrew, of Philadelphia police.

Hampton said he's now retired but occasionally comes back. He's been at the rec center since the 80s and says he's a cofounder of the North Philly Aztecs, a championship little league football program that practices there.

Right now Hampton's hoping for an arrest while staying in good spirits until his doctor clears him to return to work.

"This job keeps me going, keeps me moving," Hampton said.

"The safety and well-being of staff and residents is Parks & Recreation's top priority. Our dedicated recreation staff are core to our mission and leaders in their communities.

We do not take incidents like the one that occurred at Hunting Park this week lightly. Our focus is on providing support to impacted staff and working with police to find the individual responsible.

If anyone has information, we ask that you contact the Philadelphia Police Department."