City of Philadelphia collects over 150 guns during buyback events 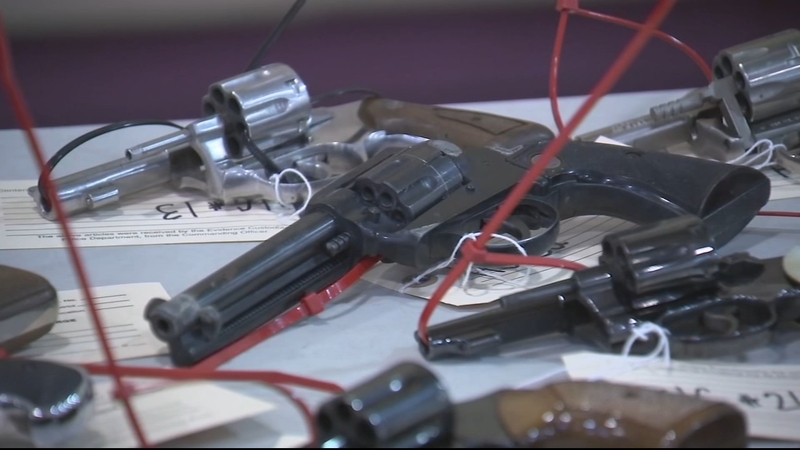 PHILADELPHIA (WPVI) -- Amid the growing violence in Philadelphia throughout the pandemic, organizers say two gun buyback events this weekend were successful.

People turned in a total of 156 firearms Saturday, including a semi-automatic assault rifle. In return, each person received a $100 gift card to Browns ShopRite stores.

It's part of the city's yearlong "2021 No Gun Campaign" organized by Philadelphia City Council, the Father's Day Rally Committee, the Philadelphia Police Department, and community leaders.

"That could be potential guns in the street because a lot of these guns could end up in a robbery," said Bilal Quyyum, who is the president of the Father's Day Rally Committee.

The city's top brass has spoken about the issue frequently.

During a press conference on Friday at the Olney Transportation Center, the recent site of a mass shooting, Philadelphia Police Commissioner Danielle Outlaw said, "At this rate, we are on pace to remove almost 6,000 crime guns from our street."

As the number of homicides in 2021 continues to outpace 2020's already high numbers for Philadephia, city leaders are encouraging the Pennsylvania legislature to step in and pass l

So far, organizers have collected a total of 380 guns at participating churches.

"This is one tool in the toolbox of the many things that need to be done in the City of Philadelphia to bring down the violence," Quyyum added.

Organizers are attempting to bring down the city's violent streak; a total of 76 homicides have occurred this year, up 33% from this time last year. 2020 closed the year with a record 499 homicide victims, the most the city has seen in 13 years.

Philadelphia Mayor Jim Kenney says while the city gets the weapons off the streets, criminals bring them back.

"I think 800 or so guns have been taken off the streets by our officers since January 1 of 2021. And they're all replaced almost immediately," said Kenney at the press conference.

Community leaders say the gun buybacks are exceeding expectations and they hope to get all illegal guns out of homes and off the streets.