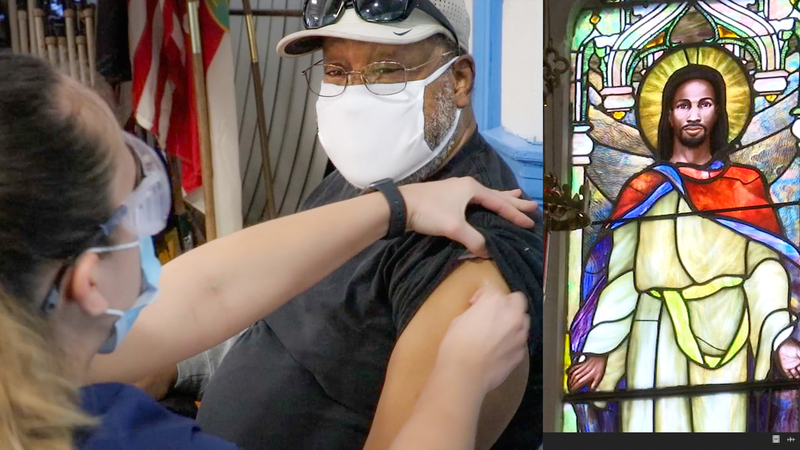 "I don't know why anybody doesn't take this serious," he said. "My sister died of COVID."

His sister, Barbara, was just two days shy of turning 67 years old. Roger had to say goodbye to her over the phone.

"If you witnessed somebody dying of COVID, a loved one, you wouldn't question any of this," he said about getting vaccinated today.

The opportunity came from a partnership between the African Episcopal Church of St. Thomas and Main Line Health (Lankenau Medical Center). Today marked the first of hopefully several days in which vaccinations are brought directly to the community.

"I know people in the African American community, people of color, who will not feel as comfortable going to a medical center as they will feel coming to a place of worship to receive their vaccine," said Father Martini Shaw, the Rector at St. Thomas.

During the pandemic, inaccessibility compounds with skepticism to create a vulnerable situation in the black community.

"Historically, there have been some instances in American history whereby African Americans were used as guinea pigs in medical research and medical explorations," he said. "There is a hesitancy about if this is maybe, possibly, another way that the government or medical community is using the African American community to do research medically."

Father Shaw cited the 1932 Tuskegee Study as an example. But he says things are much different with the COVID-19 vaccine in 2021.

"There has been research done on it," he said. "That research population has included African American scientists who have assured us that it is indeed a safe vaccine."

Thus, it was a momentous day to welcome community members back inside a church whose doors have remained largely closed during the pandemic.

"You can feel the relief but at the same time you can still feel the pressure of the demand," said Dawn Tice, the Vice President of Clinical Operations at Main Line Healthcare. "Versus a seven-day-a-week, 12-hour day, this is more of what we call, like, a day-one day-28 and perhaps a day-56 day where we'll be here multiple times in the community."

This means that the clinic will not operate daily nor weekly. Instead, it will resume operations in early March to administer the second dose for today's group. In the meantime, they are preparing a waiting list to call locals who have not yet received their first shot.

Father Shaw encourages the community to call the African Episcopal Church of St. Thomas at (215) 473-3065 for further inquiries.

"The Church is doing what it's called by Jesus Christ to do and be," he said. To be there for the people."

The oldest African Episcopal Church in the country, St. Thomas is no stranger to fighting epidemics and suffering.

"We were founded in 1792," he said. "Absalom Jones and Richard Allen, they were in the forefront of helping people during the Yellow Fever epidemic here in Philadelphia."

Historically speaking, the COVID-19 pandemic then presented a familiar challenge.

"We're continuing the legacy of Blessed Absalom Jones, of being there when people need you most. During pandemics, during epidemics, during suffering, during pain."

Father Shaw is hopeful for the day that his church will open for in-person congregations. In the meantime, he is thankful that their virtual masses have reached even more people through the internet.

RELATED: 'Leaders and Legends' on display for Black History Month in North Philadelphia

Leaders and Legends of North Philadelphia's past and present are on display at a special Black History Month exhibit in Fairmount Park!