The district said many cartons were filled with the sanitizer, sealed and then shipped out with the milk.
WPVI
By 6abc Digital Staff 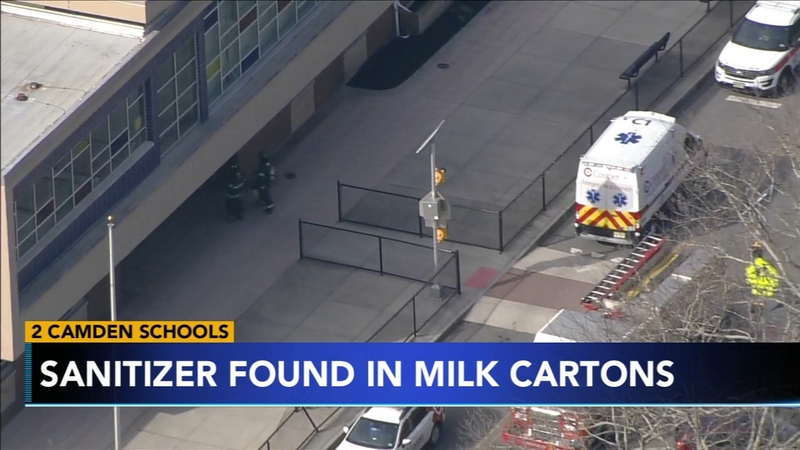 CAMDEN, New Jersey (WPVI) -- Students at two early childhood developmental centers in Camden were sent to the hospital Wednesday out of an abundance of caution after a substance was found in milk cartons, officials said.

At about 9 a.m., staff at the Early Childhood Development Center on Pine Street called 911 after 25 children ingested milk from sealed cartons with an unidentified substance that had an antiseptic-like odor to it, according to officials with the health department.

According to Camden School District officials, the substance was determined to be a "non-toxic, consumable sanitizer that runs through the vendor machines prior to milk."

The district said many cartons were filled with the sanitizer, sealed and then shipped out with the milk.

Eleven students were transported to Virtua Our Lady of Lourdes hospital for examination and discharged later in the morning.

Twenty-one additional students were transported by bus with one staff member to Cooper Medical Center, officials said. They were also discharged later in the morning.

First responders were also called to the Riletta Twyne Cream Early Childhood Development Center on the 1800 block of Mulford Street.

Five more children were taken to Cooper Medical Center and were also discharged in the afternoon. Additionally, Cooper University Health Care sent doctors to the Mulford Street location to examine an additional 15 children on site who were all cleared to go home.

"This was a scary situation but thankfully, everyone who was exposed to the milk is in stable condition and either back at school or home," said Camden County Health Officer Paschal Nwako. "This investigation is ongoing, and our department will get to the bottom of this situation. In addition, I want to thank all of our first responders and public health employees who worked together to protect the health and welfare of these children."

The district said it pulled all the milk Wednesday from the school facility and will do so again on Thursday.

So far, there are four schools known that have been impacted and preliminary testing has been conducted, officials said.

"Nothing is more important to us than food safety and the well-being of our communities. We are fully cooperating with the investigation in Camden and are thankful for the quick action of our employees, school district, emergency professionals, and all of those who responded as soon as the issue was discovered," said a spokesperson for Aramark, the vendor for Camden County Schools.

According to the district, the Early Childhood Development Center "services the social, emotional, and scholastic needs of preschool and kindergarten students."