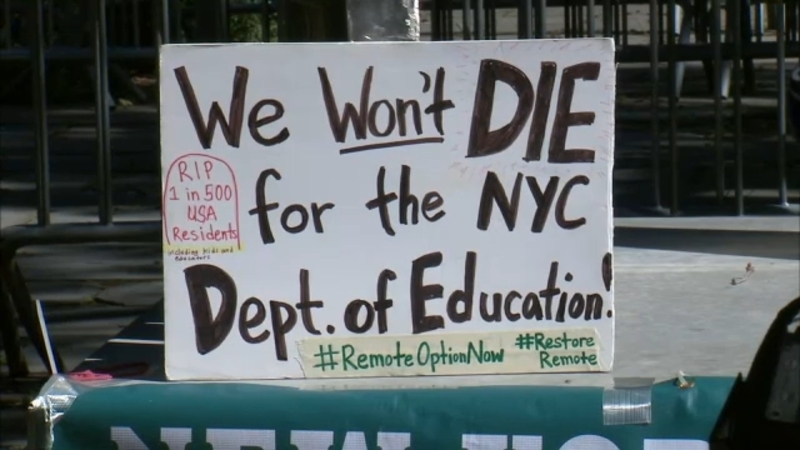 NEW YORK CITY -- A new roadblock could put New York City's vaccine mandate for schools in jeopardy as it closes in on Monday's deadline.

A federal appeals court has temporarily delayed the city from implementing its vaccine requirement for public school employees.

The temporary restraining order was granted by a judge on the federal government's Second Circuit Court of Appeals on Friday night.

The case will now go to a three-judge federal panel, which agreed Saturday to expedite the argument over the city's vaccine mandate for public school teachers and staff.

A hearing is now set for Wednesday at 10 a.m. two days after the mandate was supposed to have taken effect. The temporary block remains in effect pending the outcome of the hearing.

The city had asked for a quick resolution in a letter to the court that read:

"By casting a cloud over the Commissioner of Health's order regarding vaccination of DOE workers, and the outcome of a labor arbitration conducted by plaintiffs' labor representatives, the administrative injunction threatens the DOE's safe resumption of full school operations for the city's nearly one million students - hundreds of thousands of whom are not yet eligible to be vaccinated."

RELATED: Philadelphia school district employees must be fully vaccinated before October or get tested

The education department also released a statement following the ruling:

"We're confident our vaccine mandate will continue to be upheld once all the facts have been presented, because that is the level of protection our students and staff deserve. Our current vax-or-test mandate remains in effect and we're seeking speedy resolution by the Circuit Court next week. Over 82% of DOE employees have been vaccinated and we continue to urge all employees to get their shot by September 27."

This new case, brought by city public school teachers, was initially heard by a federal judge in Brooklyn, who declined to grant the injunction. They then successfully appealed to the court of appeals.

"While we still await a ruling in a separate state court review of the city's vaccine mandate, the federal court ruling gives the Mayor and city Department of Education more time to put together a real plan for dealing with the expected staff vacancies the mandate would create. We hope they take advantage of this opportunity," United Federation of Teachers President Michael Mulgrew said.

Under the mandate, workers at New York City schools would have until Monday to get their COVID vaccinations before it goes into effect, prompting fears and warnings of a teacher shortage if not enough substitutes can be found.

Officials announced they have decided to switch six Fridays this school year to half days to give teachers professional development time.

In a memo to school officials Saturday morning, Schools Chancellor Meisha Porter says unvaccinated school staff can continue to work next week under the existing testing requirements, "with the possibility that the vaccine mandate will go into effect later in the week."

Right now, about 10,000 teachers remain unvaccinated, and schools are scrambling to replace them before the deadline.

The unions representing teachers and principals are urging Mayor Bill de Blasio to push back the deadline.

All school employees -- including cafeteria and school lunch programs workers -- have until the end of Monday to report their vaccination status, and those who have not gotten a first dose will not be permitted to return the next day, leaving principals with little time to replace them.

The principals could then be greeted the next morning with personnel shortages across the board -- teachers, teachers aides, paraprofessionals, nurses, cafeteria workers, custodians. Cannizzaro said principals were told Thursday that "the overwhelming majority of schools" may be opening with just one school safety agent.

"This is the nightmare scenario," Mulgrew said.

De Blasio seemed confident that vaccinated replacements will be ready to step in.

"Central staff has thousands of certified educators who could step in to different roles, if needed," he said. "So they will be ready. But the reality we are seeing right now is, we think the overwhelming majority of our educators and staff are going to be there on Monday."

If there are massive staffing shortages, Mulgrew said he will bypass de Blasio and go straight to Governor Kathy Hochul for help.

Meanwhile, concerned parents and teachers rallied outside City Hall Saturday, demanding a remote learning option for students that goes beyond the medical exemption.

Parents say the hold on this vaccine mandate for teachers and school staff has only added to the uncertainty facing students.

So far, it's estimated at least 100,000 student have not yet returned to the classroom.

"We are expecting to show up to school on Tuesday and have teachers missing which would just add to the overcrowding and confusion," Tan said.

Vaccination rates in schools vary, and the education department is planning to move teachers and even central office staff around to fill holes in staffing.

"There are schools with between 30 and over 100 people on the non-compliant list right now," Cannizzaro said.

A tentative agreement on a new contract has been reached with Philadelphia teachers and the school district on Tuesday night, said Jerry Jordan, president of the teachers' union.

The UFT believes it will have about 95% vaccination, leaving about 6,000 teachers unvaccinated at the deadline. The city reports the UFT vaccination rate is 87%, and 80% for school employees overall.

"We're lucky that both CSA and UFT have the largest percentage of vaccinated members," Mulgrew said. "We're hoping by Monday night we're at 100%, but we know realistically that's not going to happen."

Earlier this week, a judge lifted a temporary restraining order in a lawsuit brought by city unions.

Judge Laurence Love sided with the city, finding municipal unions "will be unable to establish a likelihood of ultimate success on the merits."

Since school started two weeks ago, more than 1,100 students and 500 staff members have tested positive for COVID.