The grandparents are speaking out in defense of the girl's lawsuit.

Two New Jersey parents have been ordered to contribute to their adult daughter's education, against their will. However, despite a midnight deadline to cough up thousands, they still say their estranged child is not entitled to a dime.

Her parents tell Action News that they haven't spoken with their daughter for almost two years. But now they may have to pay $16,000 this year and in future years for her college tuition.

"What child does this? It's insane," said Ricci's mother, Maura McGarvey.

"She comes from two loving families and she was given what she wanted when she was growing up," said her father, Michael Ricci.

But Angela Ricci, Caitlyn's grandmother, has another take on it.

"How would you have a relationship with your parents if they don't want to contribute to college?" she asked.

The fight for money to pay for out of state tuition at Temple University has turned into a down-right dirty war of words.

"'Caitlyn is a spoiled brat,' and that was the nicest thing any of them have ever said about Caitlyn," said Caitlyn's attorney, Andrew Rochester. 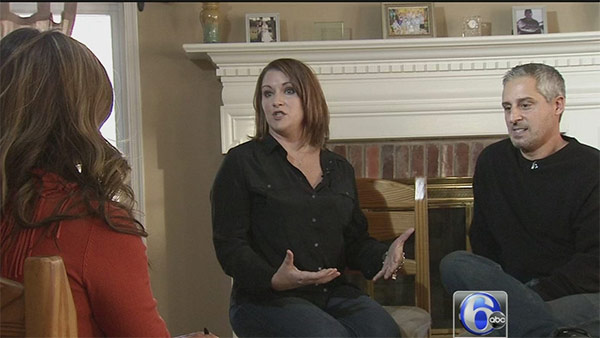 Caitlyn's parents were young loves. Their marriage only lasted two and a half years but, the two say, they amicably parented to give their daughter the best life they could.

Caitlyn's parents describe their daughter as a typical rebellious teen.

"Instead of following our rules, she decided she is going to leave her mother's house, where she was living, and move in with her grandparents," said Michael.

And that's where the trouble started.

"Caitlyn did not voluntarily leave the home. She was thrown out by her mother," said Rochester.

And the relationship crumbled.

Caitlyn's grandmother, Angela Ricci, says, "They just don't want to pay because they have to pay by the middle of the week. The balance they owe. This has been going on for two years."

It's interesting to note that her grandparents are the ones who paid for the attorney to sue their own son, Caitlyn's father Michael.

The grandparents' brief comments paint a very different picture of the private war being waged inside this family.

Action News is also learning the rift stated when her parents say Caitlyn got kicked out of an internship program.

Maura explains, "From the time Caitlyn was a teenager she was a challenging child, but I think all teenagers are."

They also say Caitlyn bought a new car after she moved out, and filed her suit against her parents for money.

"I think she just wants money. She wants us to pay for her education. She feels this is owed to her," said Maura.

Caitlyn turned to attorney Andrew Rochester to represent her in the lawsuit. He spoke with us on Caitlyn's behalf.

"Caitlyn really is a good girl. She is the nicest, sweetest girl. All she wants is to go to college," said Rochester.

And he paints a very different picture of the family's dynamic.

"They questioned her morality. They accused her of awful, awful things," said Rochester.

Caitlyn's parents joined together and filed a motion to emancipate their estranged adult daughter but on the Friday before Mother's Day, Maura says the court papers arrived - she was suing them.

"Did I ever expect my daughter to sue me? No, of course not. It's heart breaking," said Maura.

A judge, turning to a New Jersey legal precedent known as 'Newburgh' that says divorced parents may be required to contribute to their children's education, no matter their age.

The judge ruled in Caitlyn's case her parents have to pay $16,000 this year.

"The law in New Jersey is so clear. It is cut and dry. The law says parents are supposed to contribute to their children's post-secondary expenses," said Rochester.

Maura and Michael say they were willing to pay for her education in state, in New Jersey, if she followed rules and lived at home.

"It is just unbelievable. I don't think there is any person there is not one adult or parent who can imagine that this can happen to them," said Maura.

However Caitlyn, who they say won't reply to their messages, applied to Temple University out of state and the only time they have seen her in the last two years is in a courtroom.

"I spend a lot of time looking at her, looking over trying to get eye contact and she won't look. All you want to do is grab her and shake her and look at her and tell her you love her and tell her we can work this out," said Maura.

This semester's bill for Temple was due Wednesday. Caitlyn's parents refused to pay, and now that bill is overdue.

"When he ruled that way, I said there is no way she is getting anything from me until we establish some kind of a relationship again," Michael said.

The parents are appealing the judge's decision.

We tried to reach out to the two judges in the case but the court told us:

"The code of judicial conduct in New Jersey is that judges do not comment on cases or their rulings."

Caitlyn's grandfather, Matthew Ricci, says, "It's the law. It's the law in New Jersey. Go check the law. And two judges said she has to pay."