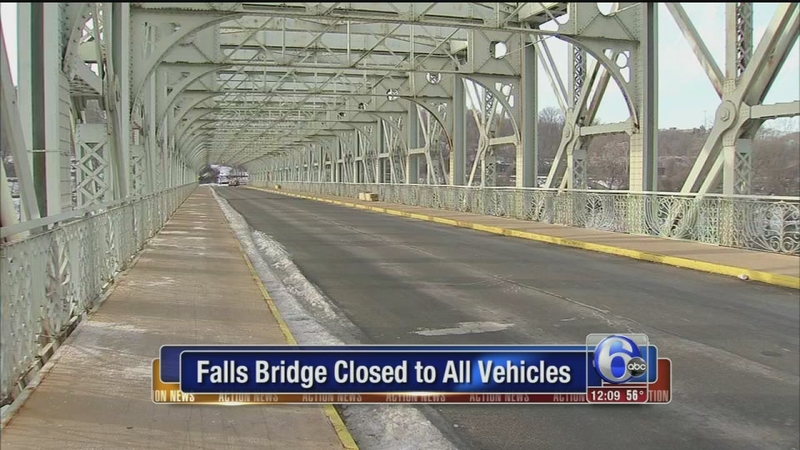 EAST FALLS (WPVI) -- Thousands of drivers who use the Falls Bridge each day will need to find another way to get around.

As of this morning, the bridge is closed to vehicles for repairs.

The work is expected to be completed by April 1.

"I'm inconvenienced, but it is what it is. I'd rather it be fixed than not," said one commuter.

While the bridge is closed, crews will fit special brackets under the bridge, strengthening the steel beams beneath the road surface.

In East Falls, folks are bracing themselves for the congestion that will come with the detour.

City officials are instructing drivers to use the City Avenue bridges instead.

"It's going to be crazy around here. Traffic is already crazy in the morning coming across here, and it's going to be like hell," said Tom McDaniel of East Falls.

City officials announced the closure in December, and at the entrance to the bridge there's a sign posted as well.

Still, we managed to find some folks who hadn't heard about the repairs.

When asked what she's going to do to get around during the repairs, Jacqueline Conyers-Jordan of North Philadelphia said, "I don't know! I have to figure that out now I guess."

While drivers will have to find another route, bikers and pedestrians will have access to the sidewalk.

Folks who use the bridge for recreational purposes were happy to hear about the repairs to the 121-year-old bridge that's a fixture in Fairmount Park.

City officials hope this round of repairs will last until a full restoration can be done in five or six years.