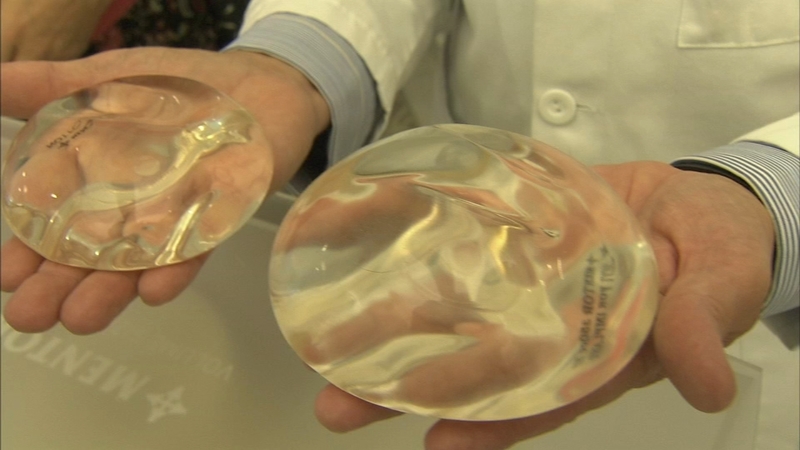 The Food and Drug Administration has proposed better warnings for women considering breast implants spelling out the risk of serious complications.

The new rules are for both surgeons and manufacturers, however, some of those involved don't think they go far enough.

Marge Swanson of Strathmere, New Jersey, first got silicone implants in her 20s.

Her problems started shortly afterward: first, a build-up of scar tissue around the implants, then one began to leak.

"My breast shape started to get very distorted," Marge recalls, adding, "I was really frightened."

Swanson had the leaking one replaced, but never felt completely at ease.

When she had Dr. Kirk Brandow of the Brandow Clinic in Bala Cynwyd, exchange them for saline implants a few years ago, he discovered another silicone leak.

"This is the silicone, right here," he says, showing Action News pictures he took of the implants.

"They were sticky, gooey, and you look at it and think - that was in my body!" she recalls of first seeing the pictures.

Today's FDA action is aimed at complaints it isn't adequately protecting the millions of women with silicone or saline implants.

The agency says manufacturers should add a warning highlighted by a box - the most serious type - to the information given to women considering implants.

And an ingredients list in simple language, so patients know about any chemicals and heavy metals.

The FDA is also recommending patients complete a checklist to make sure they understand all the possible side effects of the implants, such as scarring, pain, rupture and even a rare form of cancer.

It also wants women with silicone implants screened for ruptures five years after surgery and every two years after that.

Dr. Brandow says with a 60% rupture rate after 15 years, that's too little.

"They shouldn't be on the market," he says clearly.

And the proposed guidelines aren't mandatory.

The agency also wants companies to explain that breast implants often require repeat surgeries and they should not be considered lifelong devices. About 1 in 5 women who get implants for cosmetic reasons need to have them removed within 8 to 10 years, according to the FDA.

Swanson says previous doctors never told her about risks, screenings, or the limited life of her implants.

"People think that once they get them, they're set, and that is not the case at all. It took me many years to learn that," says Marge.

"If you have a (silicone) implant in your body, and it ruptures, that silicone can go throughout your body. But if you have a saline solution, which is purified water, your body can absorb that and it won't harm it," she notes.

In a separate issue, the FDA has received thousands of reports from women who blame their implants for a host of health problems including rheumatoid arthritis, chronic fatigue and muscle pain.

Earlier this year, the FDA held a meeting at which dozens of women urged the agency to place new warnings and restrictions on implants.