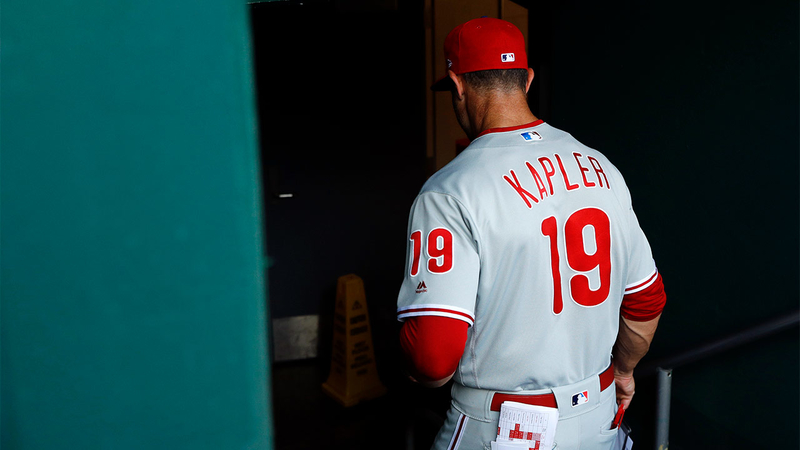 "The Phillies have relieved Gabe Kapler of his duties as manager," the team said in a statement.

The team said Kapler has one year remaining on his current contract.

Phillies Managing Partner John Middleton said in the statement, "Several years ago, I promised our loyal fans that I would do everything in my power to bring a world championship team to our city. I will never waver from that commitment. During the second half of this season and continuing into this week, I have evaluated our organization extensively, a process that included talking to many people both internally and around the league. Reassuring to me was the endorsement that people outside the Phillies gave to the progress we have made recently, both organizationally and on the field. Nevertheless, with the knowledge that I have gained from my evaluation, combined with my personal reflection on the 2019 season, I have decided that some changes are necessary to achieve our ultimate objective. Consequently, we will replace our manager. I am indebted to Gabe for the steadfast effort, energy and enthusiasm that he brought to our club, and we are unquestionably a better team and organization as a result of his contributions. With Matt leading our search for our next manager, I am confident that we will find the right person to lead us."

"On behalf of everyone in our Baseball Operations department, I want to thank Kap for his tireless commitment to the Phillies over the last two years," said General Manager Matt Klentak in the statement. "When we hired Kap, it was our goal to develop a positive, forward-thinking and collaborative culture throughout the organization that would allow us to compete with the best teams in the league year in and year out. While we have fallen short in the win column for the last two years, I can confidently say that Kap's efforts have established a strong and sustainable foundation for this organization moving forward. In the coming weeks, John, Andy and I will work diligently with others in our Baseball Operations department to find the right individual to build upon the existing foundation and bring a championship home to Philadelphia."

A day in the life of Phillies Manager, Gabe Kapler. Ducis Rodgers reports during Action News at 6 p.m. on January 30, 2019.

The Phillies finished 81-81 this season, a one game improvement from Kapler's rookie season as manager.

"I am grateful to John, the Buck family, Andy, Matt and the entire Phillies organization for giving me the opportunity to lead this team for the last two years. I have tremendous respect for this organization, this franchise and this city," said Kapler. "We came into 2019 with very high hopes. We fell short of those, and that responsibility lies with me. The next Phillies manager will inherit a team of talented, dedicated and committed players. There has been nothing more fulfilling in my professional career than the opportunity to work with the players on this team. I will forever value the relationships I developed with them. As I move on, I know that this organization is in a great spot and will see a lot of success going forward. My hope is that I helped contribute to a developing culture in the organization that flourishes in the years to come. I've come to care for this franchise and have the best wishes for this group in the future. The passion and devotion of the Phillies fan base both inspired and humbled me daily. It was an honor to grow, develop and learn with this team. I'm looking forward to what the future brings, and I know I'm a better leader and person for having had this opportunity."

Additionally, pitching coach Chris Young will not return in that position in 2020 and hitting coach Charlie Manuel will resume his role as senior advisor to the general manager.

The Phillies had a big hump in attendance this season to 2,727,421 from 2,158,124, their highest since 2013. They started with a three-game home sweep of NL East champion Atlanta in front of packed houses that had the feeling of a return to 2007-11, when Philadelphia captured five straight NL East titles, including the franchise's second World Series championship in 2008.
The Phillies were only two games behind in the NL wild-card standings after beating the Braves on Sept. 18 but lost eight of the next nine, including a five-game sweep at Washington. They finished eight games behind Milwaukee for the second wild card and 16 behind first-place Atlanta in the NL East.

Injuries were a big reason why Philadelphia failed to deliver a winning record for the first time since 2011. It lost leadoff hitter Andrew McCutchen for the season in June and six of its top seven relievers missed significant time. Free-agent addition David Robertson pitched just 6 2/3 innings and Pat Neshek and Tommy Hunter threw a combined 23 innings.

Despite adding Harper, McCutchen, J.T. Realmuto and Jean Segura, the offense was inconsistent and the Phillies couldn't string together more than four victories in a row. Hitting coach John Mallee was fired and replaced by former manager Charlie Manuel in August. The Phillies improved but couldn't overcome poor pitching.
The starting rotation struggled throughout the season and the injury-depleted bullpen was filled with minor leaguers and castoffs.

"My job has always been and will always be to take the collection of individuals I have to work with and make that situation the best I possibly can," Kapler said.

Kapler was named the Phillies' 54th manager on October 30, 2017. Before his leadership role with the Phillies, Kapler served as director of player development for the Los Angeles Dodgers.