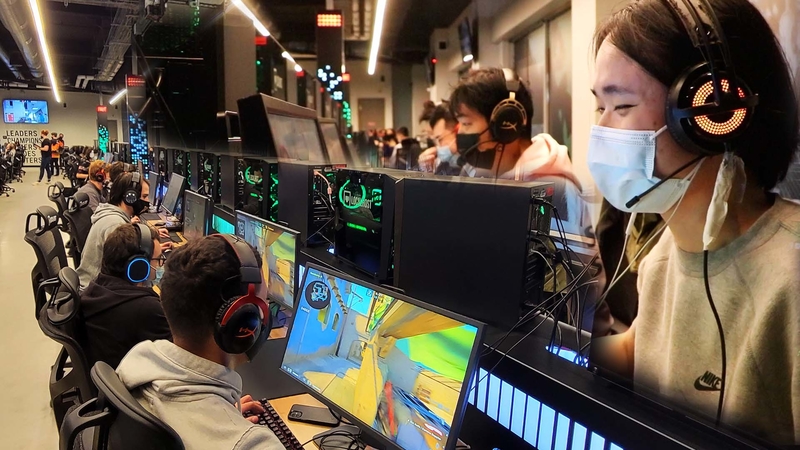 PHILADELPHIA, Pennsylvania (WPVI) -- "No matter what your interest is in gaming, you have a place to come here and find that community and be a part of something bigger," said Ben Schlegel, Vice President of events with Nerd Street Gamers.

What started as a grassroots community in the early 2010s has leveled up into a massive gaming coalition taking the city by storm.

"We're a Philadelphia born and started company," said Schlegel. "We went from an office space on North Third Street to our brand new Localhost facility here on North Broad Street."

Today, Nerd Street Gamers opened a new branch of their series of esport facilities called, "Localhost." The indoor entertainment complex is home to more than 150 state-of-the-art personal computers and A-list gaming consoles such as the Playstation 5 and Nintendo Switch. It is located at their national headquarters on North Broad Street in Philadelphia, which they call, "The Block." They have partnered with many local institutions, such as Philadelphia Parks and Recreation and Five Below, to make video game events a reality.

The congregate setting is a breeding ground for leadership, teamwork, and in-person interactions to break down the stigma surrounding video games.

"Gamers, it's kind of like they stay inside all day and don't meet with other people," said Samuel Jolade from Williamstown, New Jersey. "But here, you physically see a whole bunch of people here. It kind of feels like a home away from home."

Gamers have found ways to convert zeroes and ones into real-world relationships that require no power outlets or internet connections.

"We met at a Dungeons and Dragons game," said Brittany Gilbert-DeMarco. Her husband, Timothy, added, "Gaming is literally the whole reason we're together."

The esports scene has provided an opportunity for like-minded individuals to connect both virtually and in-person.

"You're making friends purely because you guys have the same interest," said
Jiaming Wang, who is originally from China. He has banded together with friends to create a team that competes at events playing the first-person shooter game, Counterstrike.

"That's where we met and we decided maybe we should attend this event together," said Wang.

Nerd Street Gamers plans to bring many more events like today's grand opening to the city of Philadelphia.

"We're going to look to keep building our community here in Philadelphia and really become the hub of gaming on the East Coast," said Schlegel. "If you're in the gaming community or in the software community, you will hear, 'Localhost,' you will know what that means and you will come here.

Interested gamers will be able to attend events regularly and rent PCs hourly at the new Localhost facility. To learn more, visit their website.

After suffering from tragic gun violence, this West Philadelphia recreation center has installed a first-of-its-kind community Esports center to give kids a safe place to play.