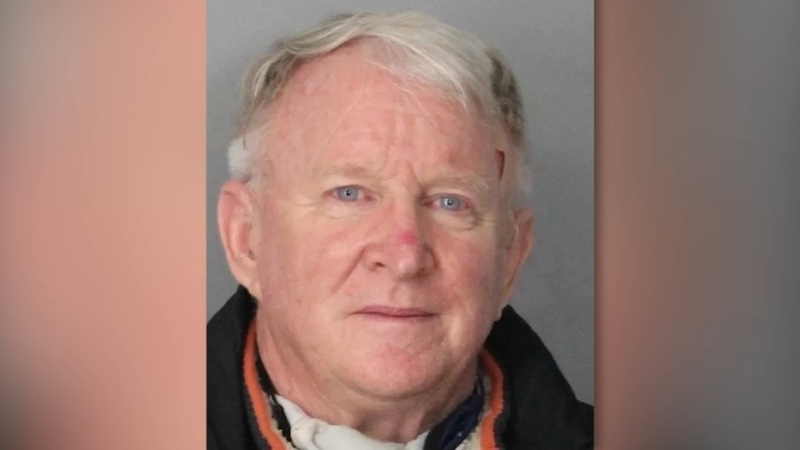 NEWARK, Delaware (WPVI) -- A Delaware lawmaker who came under fire last year for using a racist and sexist slur to refer to sex workers was arrested on shoplifting charges Tuesday, just days after announcing that he was resigning for health reasons.

Newark police said a warrant was issued Tuesday for Rep. Gerald Brady's arrest on two counts of shoplifting, and that Brady, 65, turned himself in a few hours later. He was released on his own recognizance.

House Democrats announced last Friday that Brady was resigning effective Feb. 4, but they did not disclose that he was under criminal investigation.

Rep. Gerald Brady, who came under fire last year for using a racist and sexist slur to refer to sex workers, is resigning.

Newark police said in a press release Tuesday that they received a report shortly after 5 p.m. on Jan. 12 of a shoplifting incident at an Acme grocery store. An employee told officers that he saw a man enter the store and recognized him from a Dec. 29 shoplifting incident that had not been reported to police.

In the second incident, the employee was able to identify the suspect's car and get the license plate number, then watched him push a shopping cart full of merchandise past the registers and toward the exit, according to police. After being confronted by the employee, the man declined to pay for the merchandise, left the store and entered his car.

Police were told that the suspect's vehicle had a General Assembly license plate bearing Brady's initials. After viewing a photo of Brady, the store employee confirmed that the vehicle owner and the suspect in the two incidents was the same person.

Victor Battaglia Jr., an attorney representing Brady, said it would be "premature" to comment on his arrest.

"We would just ask that people and the media not jump to any conclusions," Battaglia said, adding that Brady is scheduled for arraignment some time in March.

In both cases, Brady is accused of stealing less than $200.00 worth of merchandise, including several bundles of firewood.

Police say punishment could come in the form of a fine of up to $2,300.00 and a year in prison, but prison time is unlikely for something like shoplifting.

Andrew Volturo, a spokesperson for the House Democrats, declined to comment on Brady's arrest. He instead pointed to a statement last Friday in which House Speaker Pete Schwartzkopf described Brady as "a kind and empathetic representative" and noted that Brady had said he had been diagnosed with post-traumatic stress disorder. Brady indicated in a prepared statement earlier Friday that the diagnosis was the result of his deployments to the Middle East with the Delaware National Guard.

"Our first and foremost thoughts are that Gerald gets the help he needs," Schwartzkopf said at the time.

Brady, who is executive director of the Delaware AFL-CIO, faced calls for his resignation last summer after he inadvertently sent an email to an advocate for decriminalizing prostitution in which Brady used a slur.

Thinking he was forwarding an email from the advocate to another person from whom he was seeking input, Brady instead mistakenly hit "reply" and sent his comments to the advocate.

The advocate had referred to a study indicating that the presence of strip clubs and other adult entertainment establishments in New York City led to a decrease in sex crimes. Researchers suggested that the reduction was mostly driven by potential sex offenders frequenting those establishments rather than committing crimes.

"Is the dude basically saying, if we provide free (oral sex) for Uncle Pervie there will be few rapes and few (a slur for Chinese women) will be shipped in CONEX containers to the Port of Wilmington??" Brady wrote from his official government email address.

Amid calls for Brady's resignation, Democratic House leaders had ordered him to complete sensitivity training and to reach out to members of the Asian American community in an effort to regain their trust. A week later, Brady announced that he would not seek reelection after his current term expires.

That was not sufficient for some critics, including fellow lawmakers. Rep. Madinah Wilson-Anton, a Newark Democrat, filed a complaint against Brady with the House Ethics Committee, alleging that he had engaged in conduct that either brings the House into disrepute or reflects adversely on a member's fitness to hold office.

Following a closed-door meeting of the Democrat-led committee, Majority Leader Valerie Longhurst announced in September that committee members had unanimously agreed that Brady did not violate legislative rules of conduct and that no further action would be taken. The statement was accompanied by a memorandum in which attorneys for the Democratic and Republican caucuses noted that there was no precedent for disciplining a lawmaker for speech outside of legislative proceedings, and that the prospect of such disciplinary action raised First Amendment concerns.