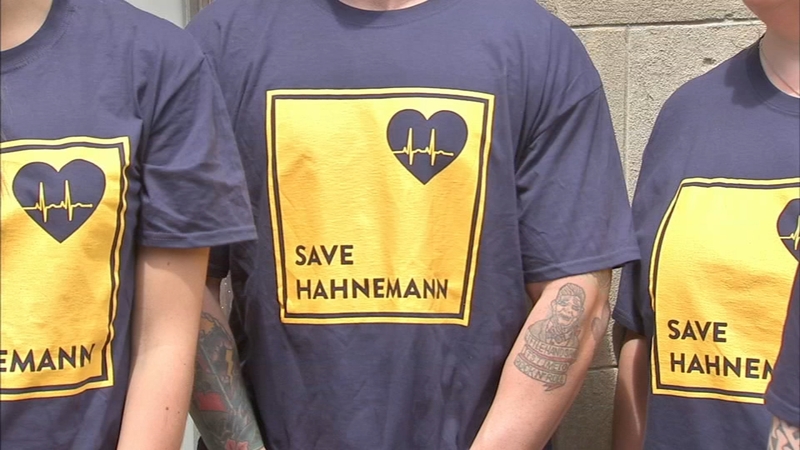 CENTER CITY (WPVI) -- To shouts of "Shame! Shame!" nurses from Hahnemann University Hospital and other medical facilities rallied with elected officials outside the targeted-for-closing hospital.

The union thanked Governor Wolf and the Pa. Health Department for plans to appoint a temporary manager to oversee plans to close down Hahnemann and operate St. Christopher's Hospital for Children.

State officials say they are having "active conversations" about how and when a manager would be in place.

Many speakers' comments were aimed directly at Joel Freedman, the hedge-fund manager who owns both PAHS and AAHS.

City Council member Helen Gym (D-At-Large) hailed the hospital workers, "The people right here, you guys are all heroes. But we've got a fella living in Rittenhouse Square right now that is ruthless and relentless about making sure this is his little real estate playground. And that is not gonna happen!"

Susan Bowes, R.N., president of the Hahnemann local of PASNAP, also took aim at him.

"He's transferring patients out in the night," she continued,

"He is a coward. He won't even show his face in the city," Bowes said, accusing Freedman of conducting the hospital closure from his home in California.

Tearing up, Bowes said, "The nurses here have taken care of the sickest patients in the city, and we will continue to do so."

Surrounded by staffers wearing "Save Hahnemann" t-shirts in the hospital's blue and gold colors, Bowes vowed not to give up.

Hahnemann's owner filed to Chapter 11 bankruptcy protection yesterday, citing 30 debtors to whom it owes $500,000 or more.

It owes $20 million dollars to Tenet Healthcare, the for-profit chain it acquired Hahnemann and St. Chris from in January 2018.

It also owes millions to medical equipment suppliers such as Olympus (endoscopes), Synthes (orthopedic implants), and Medtronic (pacemakers), and it has a $1.1 million debt to Temple University Hospital.

Nurses from Temple expressed concern the closing of Hahnemann would make their emergency department even more overcrowded.

The Pa. Dept. of Health issued a cease and desist order last week aimed at blocking any changes at the 171-year-old hospital.

However, Hahnemann closed its emergency department to trauma patients over the weekend.

A Philadelphia Common Pleas Court judge has been asked to issue an injunction blocking the remainder of the closure, however, there's no ruling on it yet.