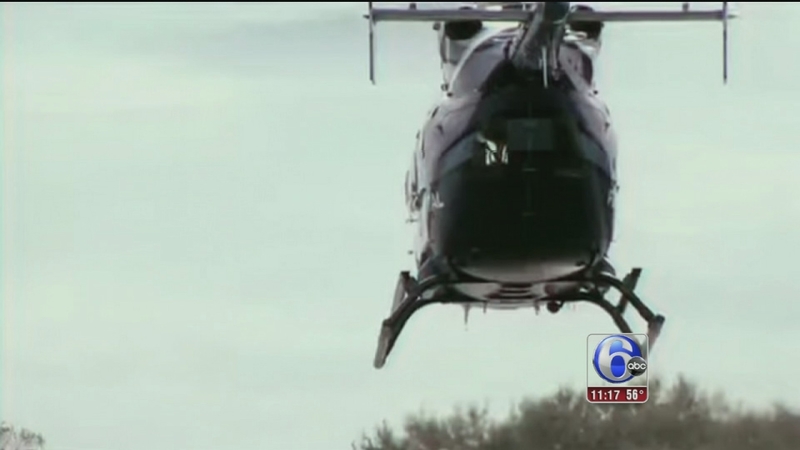 It could be the flight that saves your life, but a 6abc/ABC News national collaboration is uncovering the high prices and aggressive collection practices of the country's largest air ambulance provider.

These medical helicopters are used to get patients care during what is known as the "golden hour," the time in which acute patients need to receive critical care. But some patients say they later got the shock of their lives when they received an astronomical bill.

In September 2013, Kass and Dennis McGonagles' son Sean went into surgery to have a bullet removed from his spine, after he was the victim of random shooting.

"Every day he almost died," Sean's father Dennis McGonagle told us. "He is paralyzed from his chest down."

The McGonagles believe the stress from that surgery set off a chain reaction.

"Driving into work, that's all I remember," Kass McGonagle said.

"Her shoes were on the opposite feet and her blouse wasn't hooked up right and her mouth was disfigured, drooling," Dennis McGonagle told us.

Kass was rushed to Nazareth Hospital. The sign outside touts it as a nationally certified stroke center. But Kass and then Dennis were told she'd have to be medevac'd to Jefferson University Hospital.

"I was on the gurney, it was too late. They had me in the helicopter," Kass explained.

Although the McGonagles had to sign a consent form, they say they were never told the cost.

"Believe me I would have gotten up if I had the energy, if I was able," Kass continued.

Action News spoke with Ben Feldman, the McGonagle's pro-bono attorney, who works for the Clinic for the Disabled.

"Why they would need to do via medivac really escapes me. The McGonagles say they waited several hours in the triage room before seeing any doctor or any healthcare professional," Feldman said.

Dennis had to quit his job to care for his wife and his adult son.

Air Methods, the air transport provider, filed a lawsuit suing the McGonagles for $10,725 for the remainder, plus interest.

"I have to keep this house, pay these bills, so my wife, myself, and my son don't wind up being homeless," Dennis McGonagle agreed.

An ABC News collaboration has found Air Methods customers across the country with similar stories of getting sticker shock, for what they were told was a lifesaving service.

"I knew that I wasn't able to speak," Joe Everingham told us.

Everingham was also transported by Air Methods from BeeBee Medical Center in Lewes, Delaware to Jefferson.

"I asked is there any other alternative, any other hospital close by? Could he go by ambulance? The doctor looked at me and said no he has to go by helicopter, it's the fastest way," Joe's girlfriend Deby MacMichael explained.

Once they got to the hospital they say he was monitored overnight and then released.

"They want to give the brain a rest and they want him to come back in six weeks. I said, 'What? I can't believe this is happening,'" MacMichael said.

Then weeks after the emergency flight, the $54,000 bill arrived in the mail.

"I don't see them getting it. What am I going to do, give them $5 a week?" Everingham said.

"He could have went by ambulance. An ambulance would have been a $50 copay," MacMichael agreed.

"I was not in pain or anything, there was just a tightness in my chest," Rinaldi said.

Once there, he was told he would have to be taken via Air Methods helicopter to their main hospital, about 12 air miles away.

"It all happens so fast, it's like they just take you and put you right on," Rinaldi said.

It turns out Rinaldi had an infection, and was not having a heart attack. Air Methods is now suing him for $16,000.

"The cost was never brought up, never mentioned anything about that," Rinaldi said.

"Our CEO, I think, is fairly compensated for what he does," Webster said.

And because they are considered an airline and not regulated by the government, there is little, if any, oversite on what they bill.

"Are you gouging people?" Ross asked.

"No, absolutely not, we're not gouging people," Webster replied.

Air Methods justifies their pricing, saying their staff are highly trained trauma nurses, and they have to be ready to go 24/7, 365 days a year. And they say they have to raise the price for those with health insurance, because 70 percent of their customers are covered by Medicaid, Medicare, or are uninsured.

"The insurance company that underpays the claim is the one that really sticks them with the bill," Webster said.

And that means people like the McGonagles, Everingham, and Rinaldi may end up footing the bill for others who can't pay.

"That is why we have insurance, you don't go after the little people," Kass McGonagle said.

After ABC News got involved, heath insurance agreed to cover all of Everingham's medical transport bill.

Air Methods says they are willing to negotiate with customers who prove financial need.

We have contacted Air Methods to help get a resolution for the McGonagles and Rinaldi.

Air Methods has customers sign a financial responsibility form before they are transported, but it does not include any indication of the cost. It is the doctors and the hospitals who make the call to have people transported by helicopter, not Air Methods.

Here is a copy of Air Method's full statement:

"At Air Methods, we believe that everyone deserves access to lifesaving care. Our Patient Financial Counselors are here to help. We have a long-established charity care process in place to allow us to reduce patient financial responsibility within our legal parameters. We understand that every patient's individual and financial circumstances are unique, and our team is dedicated to partnering with every one of them as they navigate through the post-flight and critical care process."