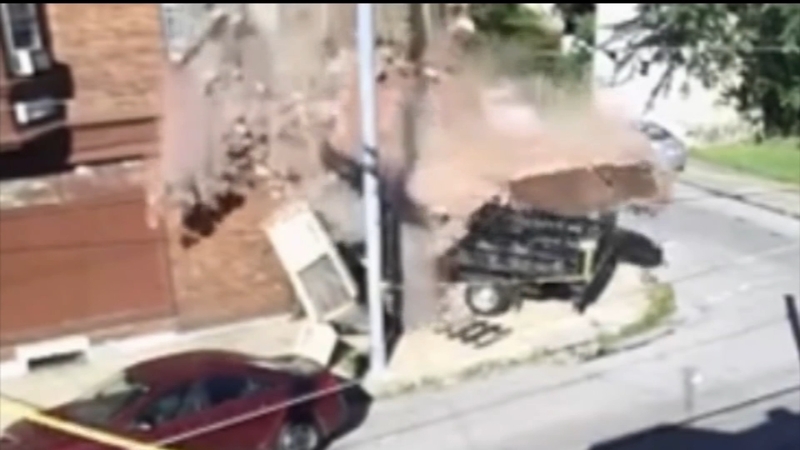 PHILADELPHIA (WPVI) -- A house in Philadelphia's East Mount Airy section collapsed after a driver struck the front of the building with a truck Monday morning.

It happened around 7:30 a.m. on the unit block of Pleasant Street.

"I woke up to a loud boom, it sounded like an explosion and I came out here and saw all this," said Kevin Womack, from West Philadelphia who said he was here visiting a friend.

Sandra Garnett was in the second floor bedroom when the truck crashed into her home.

"I was like, 'Oh my God!'" Garnett said. "I felt the house shake and I ran to the front window and then I ran downstairs and I called 911. I saw the back of the truck sticking out."

After the truck took out this steel column crews on scene say the top of the building gave out and collapsed @6abc pic.twitter.com/2u7SCLXbow

Sandra and her disabled son were able to get out of the house before it collapsed and police said there are no injuries.

Coworkers of the truck driver came later in the day to get the truck out Garnett's living room. They said the man is out of the hospital with bruised ribs, but is doing okay.

Neighbors said they want to see a four-way stop sign at the intersection of Musgrave and Pleasant Street after this collision. Garnett said a car has crashed into her corner home before.

"There's no stop sign so people that's coming out of Pleasant, they don't know that that's not a stop sign here, so people's always blowing, speeding right down here," said Rhett.

Truck was pulled out. Here’s what it looks like after the crash pic.twitter.com/7NIrVl11Ky

Neighbors said they are thankful the damage didn't spread to their homes.

Family members have set up a GoFundMe page to raise money for Garnett and her sons to live somewhere else.