The independent dive team has asked for the medical examiner to respond to the scene.
WPVI
By 6abc Digital Staff and Beccah Hendrickson 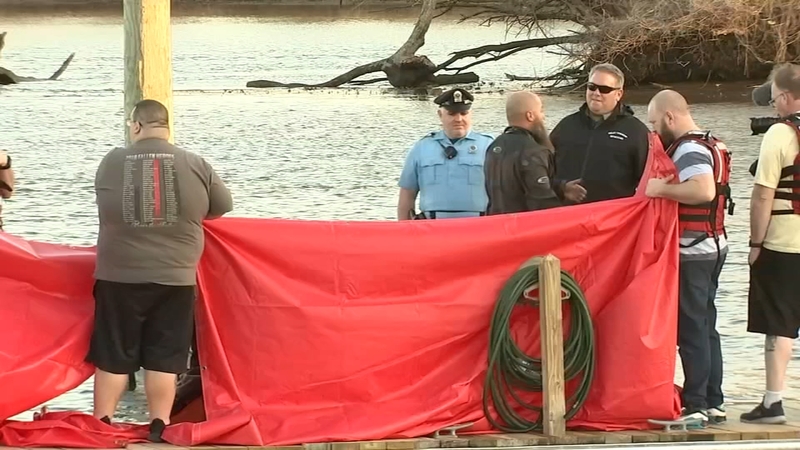 RIDLEY TWP., Pennsylvania (WPVI) -- A private diving company found a vehicle with human remains inside at the bottom of the Darby Creek Saturday, possibly tied to a man who went missing nearly 20 years ago in Delaware County.

Ridley Township police say the divers, who are volunteers with Adventures With Purpose, had been contacted by the missing person's family, who hoped to help provide closure as to what happened to their loved one in 2003 when he was last seen.

"It's the answers they need, necessary to move forward," said Doug Bishop with Adventures with Purpose.

When the man went missing on December 4, 2003, he went to pick up two children from the babysitter and never showed up at the babysitter's house," said Captain James Dougherty of the Ridley Township Police Department.

Investigators had tied the missing man's vehicle, a green Ford Explorer, to his case.

Adventures With Purpose, a volunteer diving team from Oregon, says it specializes in cold cases where vehicles are involved.

It uses sonar technology to track them underwater.

"We met with the family. We put together the clues that they were able to offer us. We also applied that with our search tactics relating to investigations and cases we solved in the past," said Bishop. "That is what led us here to search this body of water."

The divers called police upon finding the vehicle with human remains inside. First responders helped extract some of the remains as the family watched from the docks.

"I do believe it brings closure to them. Because this is something that we've been investigating for a long time, and it wasn't just the initial missing person, it was following a lot of leads over the years," said Dougherty.

Police say the remains are with the Delaware County coroner, who will positively identify the individual when possible.

The vehicle is still in the creek. Police say the docks have not been replaced in the nearly 20 years since the man went missing, and divers say one of the dock's piling punctured the hood of the vehicle.