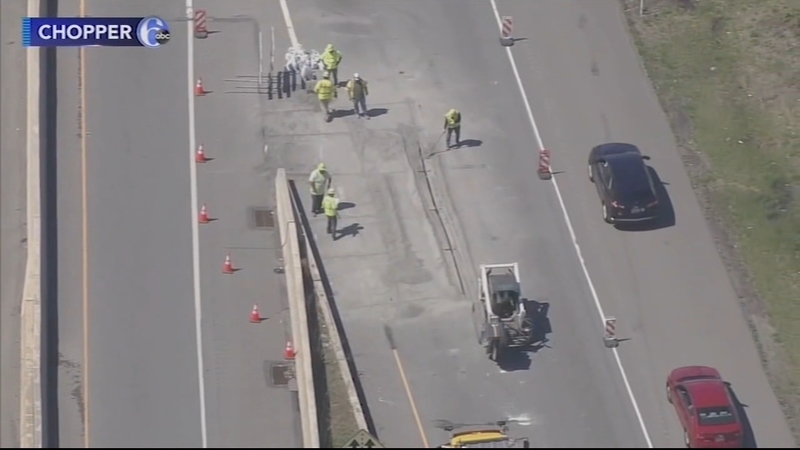 KING OF PRUSSIA, Pennsylvania (WPVI) -- Drivers may want to allow extra time when traveling on the Schuylkill Expressway in King of Prussia, Pennsylvania.

It's where drivers exit I-76 westbound and then choose to take an exit for either Route 202 or Route 422 near mile marker 328.

It might not sound like that big of a deal, but a portion of one of the busiest highways in the area is now down to just one lane for four months.

"For the summer months? Oh my gosh it's going to be horrible," said Cheryl Wells of Yardley, Pa.

"Yeah, I'm definitely going to have to make some adjustments," said Connor Murphy of King of Prussia, Pa.

The cause for the newly created bottleneck is the sinkhole that formed this past April.

Chopper 6 was also there as crews tried to patch it up then. It looks freshly paved now if you ride over it.

But on Tuesday, Brad Rudolph of PennDOT said a quick fix just isn't going to get it done.

"We apologize, but your patience will be rewarded with an end result and product that will last for many years," said Rudolph.

He said, every day, more than 18,000 drivers pass through the location, and underneath things are unsteady. So major geological work has to be done to fix the sinkhole.

The break happened on the 5500 block of 11th Street, near Einstein Medical Center, and motorists were asked to avoid the area.

"The bedrock there is very challenging. It is prone to sinkholes because voids are created between the soil and the bedrock. So, we really have to get down there and drill," said Rudolph.

For Charles Hennessey of Norristown, the exit is unavoidable.

All he could do is sort of laugh thinking of the traffic he'll likely be stuck in until the work is done.

"I only got one way home and that's 422. I'm going to have to bear through it," laughed Hennessey.

For two months the left lane will be closed. Then the next two months crews will close the right lane for repairs.

Officials said they're hopeful everything will be complete in October, and they're recommending if you have to take this route - leave some extra time for your commute.