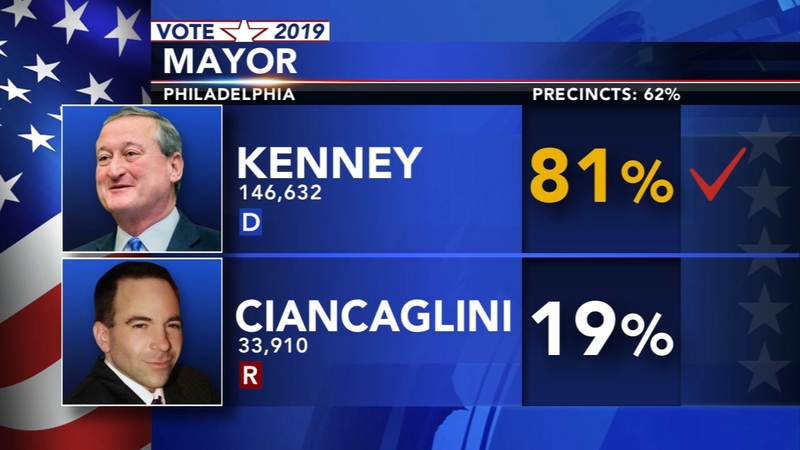 "I won't stop fighting for every Philadelphian so they can live in a safe, clean neighborhood with access to quality schools for their children and families sustaining jobs," Kenney said during his victory speech on Tuesday night.

Philadelphia Mayor Jim Kenney speaks after being re-elected for second term on November 5, 2019.

Kenney's first term has eventful, from antagonizing Trump over Philadelphia's sanctuary city status to carrying through on his top priority, a tax on soda and other sweetened beverages to fund pre-kindergarten classes and other community projects.

In recent months, he has faced a rising tide of gun violence, a major hospital closing and an explosion at a large oil refinery that closed after a devastating fire.

In the meantime, Kenney is backing a legal battle to open a supervised injection site to fight an opioid crisis that's among the worst in the U.S.

These are the Democrats who will fill their five at-large seats on Philadelphia City Council for the next four years. Among them, Katherine Gilmore-Richardson, who is replacing the retiring Blondell Reynolds Brown. But the two minority seats-- well that's where it gets interesting. There is a chance that for the first time in recent memory, having Republicans occupy those seats is not a sure thing.

Kendra Brooks of the Working Families Party looks as if she will get a seat. There is a fierce battle back and forth between her party mate Nicholas O'Rourke and Republican incumbent David Oh. As of 12 a.m. Wednesday, Oh and O'Rourke were just a few hundred votes short of each other.