Sentencing for both men is set for late February.
WPVI
By 6abc Digital Staff, Annie McCormick and Dann Cuellar 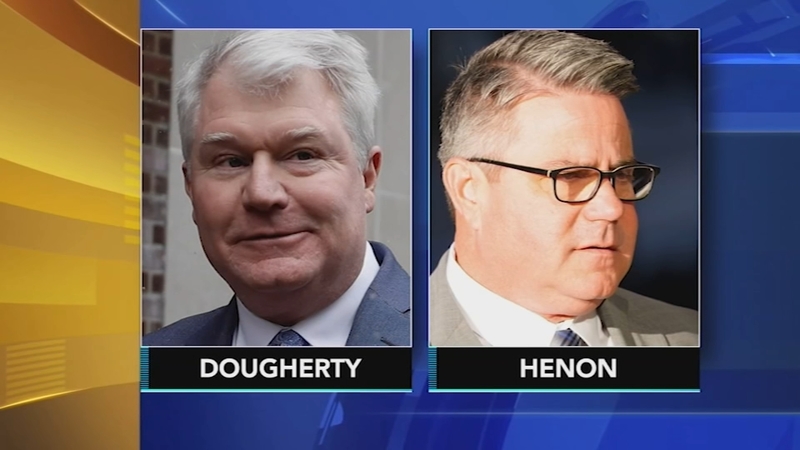 Prosecutors said Dougherty kept Henon, a union electrician-turned-Philadelphia City Council member, on the payroll of a $70,000 no-show job to help his union keep a tight grip on construction jobs.

Their convictions follow a lengthy FBI investigation of activities within the chapter of the International Brotherhood of Electrical Workers that Dougherty leads, but will not mark the end of Dougherty's legal woes.

John Dougherty and Philadelphia City Councilman Bobby Henon were both found guilty of conspiracy and other offenses in their federal corruption trial.

They face up to 20 years in prison. Both plan to appeal.

"Justice was not served today, and I can't tell you how disappointed I am by the jury's decision," Dougherty said in a written statement. "What Councilman Henon and I were found guilty of is how business and politics are typically and properly conducted. I will immediately appeal and have every confidence that I will prevail in the Third Circuit Court of Appeals."

Defense lawyers insisted that there had been no undue influence and argued that the city allows council members to hold outside jobs. The defense also questioned how it was a crime for union supporter Henon to side with Dougherty and the building trades workers he was elected to represent.

"If you know that the person you're supposedly bribing is already going to do what you want, then there is no bribe," Dougherty's attorney Henry Hockeimer Jr. said in his closing argument last week.

"He said to me he (Dougherty) could have me replaced," Streets Commissioner Carlton Williams testified. "I took it as a ... threat."

Acting U.S. Attorney Jennifer Arbittier Williams said there was no problem with council members having outside jobs, but Henon's salary was "a bribe in disguise."

"Henon's salary was the covert mechanism for paying the bribes," said Williams at a news conference. "Much of what Henon did was not, in fact, on public display but behind closed doors."

Williams called the verdict "a strong message to the political power players of this city and any city that the citizens of Philadelphia will not tolerate public corruption as business as usual."

Prosecutors over four weeks of testimony tried to show that Dougherty used Henon to press Comcast Corp. to steer $2 million worth of electrical work to a friend during cable contract talks with the city, to shut down the non-union installation of MRI machines at Children's Hospital of Philadelphia and to investigate a towing company that seized Dougherty's car.

Former Philadelphia Councilman Rick Mariano, who went to federal prison for accepting bribes to pay his credit card bills, said in an exclusive interview on Action News back in 2019 that he had tried to convince Henon to cop a plea.

"I tried to steer him right but nobody listens to me cause I'm stupid. If I was stupid, which I'm not, I went through this," said Mariano on Monday night.

Henon has not stated if he plans to resign.

Sources tell Action News that Dougherty is contemplating stepping down as union boss for the good of the union.

Dougherty still faces a second trial on charges he and others embezzled more than $600,000 from Local 98 of the International Brotherhood of Electrical Workers.