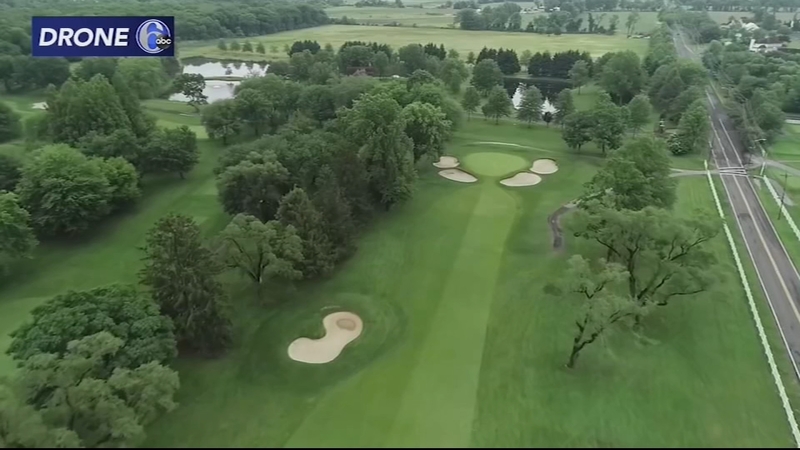 PHILADELPHIA (WPVI) -- Authorities have identified the man who was struck and killed by lightning Wednesday while on a golf course at the Burlington Country Club in Westampton Township.

Michael Ward, 70, of Florence, was found near the 7th hole of the course at about 3:50 p.m. and was pronounced dead at the scene, authorities said.

Ward became the first death from a lightning strike in the U.S. this year.

A man has died after he was struck by lightning while on a New Jersey golf course on Wednesday afternoon, Action News has learned.

At the time of the lightning strike, isolated pop-up thunderstorms were in the area.

"It just came up out of nowhere. I was sitting watching TV and I heard thunder and lightning. I looked up and it was sunny," said Norm Jones who lives nearby.

"They do often tend to be very localized they tend to develop very quickly," said meteorologist Jonathan O'Brien with NWS in Mount Holly. "Oftentimes the sun can actually still be out as these storms are going up. They may affect one town and not another."

The chances of being struck by lightning in a given year are minuscule - one in 1.3 million - and meteorologists say incidents of injury or death from lightning have been going down over the years. They hope to continue to spread safety messages to avoid more tragedies.

"There really is no safe place outside when it comes to lightning safety and thunderstorms. If at all possible you want to seek shelter inside a building or even a vehicle," said O'Brien.

AccuWeather found the most lightning fatalities happen in July.

It had been 10 years since someone in South Jersey lost their life to lightning.

Two men were killed in 2011, a construction worker in Atlantic City and a man in Hammonton.

Here are some tips on how to avoid getting injured from lightning.

We often say when "thunder roars, go indoors," which is so important.

Meteorologist Karen Rogers shows how to stay safe during a thunderstorm.

But if you hear thunder, you're already within striking distance, even if those skies are blue because the storms can come in so quickly.

So you need to be careful and it's a good time to think about that lightning safety.

Indoors or in a car is the best place to be.

There's nowhere safe to be outside.

One of the worst places to be is under a tree.

If you have to be out on a field, if you find yourself with no other option, you want to crouch as low as you can, onto the ground, with as little of your body as possible touching the ground, so that the lightning strike will hit the highest point like the tree and not impact you.

But get indoors, because again there's no place safe to be outside when lightning strikes.

A strike can happen as much as 15 miles away. So those storms could still be approaching, but yet there could be lightning strikes.

We repeat: Nowhere outside is safe.

This is important too- some people think, 'I saw the storm pass.' You have to wait 30 minutes after the storm passes before it's safe to be outside.

Try to remember these tips.

You really have to check the forecast and be weather aware this time of year before you go outside because if you can hear the thunder, you're already in an unsafe place if you're outside.
Report a correction or typo
Related topics:
weatherthunderstormlightningweather
Copyright © 2022 WPVI-TV. All Rights Reserved.
LIGHTNING
2 women have close encounters with lightning strikes
Family members mourn loss of lifeguard killed by lightning strike
'Bolt from the blue': How lightning can strike, even while sunny
Lightning strike kills lifeguard, injures 7 others on NJ beach
TOP STORIES
AccuWeather Alert: Tornadoes, large hail possible later today
Tornado watch vs warning: What's the difference?
Police ID ATV rider killed after colliding with car in Philadelphia
Delco bus driver accused of taking upskirt photos of students arrested
SEPTA police search for Center City indecent assault suspect
Some Montco school districts requiring masks as cases rise
Bryce Harper asks for fan's hat, trades his own
Show More
911 dispatcher who took Buffalo shooting call put on leave
'NFTs: Enter the Metaverse' | Watch the trailer
Boy, 4, shot inside North Philadelphia home
NY high court to determine if Bronx Zoo elephant is a person
Philadelphia Jeopardy! contestant on winning streak
More TOP STORIES News