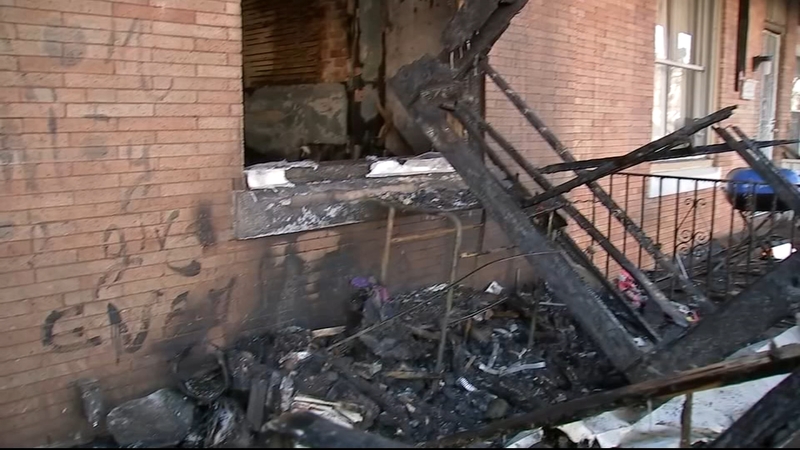 Firefighters responded to the 4500 block of North Uber Street around 11:50 p.m.

Heavy flames were coming from the first floor of one of the homes.

"It's emotionally devastating. That's the house my grandmother left me," said the man who lived in the house. He did not want to be identified.

His house was gutted and three other row homes had burned porches and water and smoke damage.

He said this wasn't the first time his house caught fire.

Devastating fire on the 4500 block of Uber Street in Logan last night. Thankfully no one was hurt, but one home is gutted and 3 other have serious damage. Neighbors say this is the 5th time the same house has been on fire @6abc pic.twitter.com/vF0kAxZOdm

Neighbors said they were worried something like this would happen again.

"This is five times - five times - this has been happening to that one house," said Lydia Dunlap, whose home sustained damage.

Dunlap said she woke up to the smell of smoke.

"Me and my son, yeah we got out OK. We put the dog in the car, came outside freezing with our pajamas on. It's crazy. It's dangerous," Dunlap said.

Crews called in a SEPTA bus to keep those displaced by the fire warm in the cold temperatures.

Firefighters got control of the fire around 12:15 a.m. Sunday, but remained for hours putting out hot spots.

No injuries were reported. The Red Cross is helping the affected families.

A spokesperson for the Philadelphia Fire Department confirmed there was at least one other fire at the same house in October. But neighbors said there were more.

"It makes no sense. It's dangerous. Someone is going to get killed," Dunlap said.