For him, like so many, Fido is more than just a pet.
WPVI
By Bob Brooks and 6abc Digital Staff 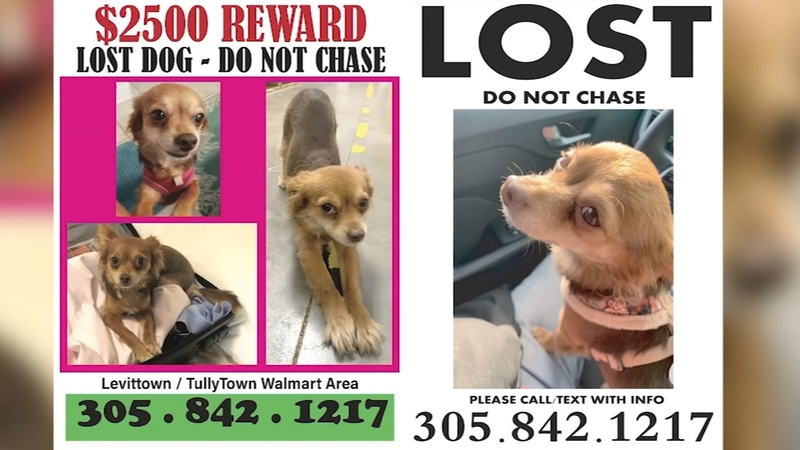 LEVITTOWN, Pennsylvania (WPVI) -- A businessman from Florida has lost his dog in the Levittown area and is asking for the community to keep an eye out for her.

Paul Singh from Daytona Beach stopped in at the Home Depot at the Levittown Center off Route 13 almost two weeks ago.

His dog Fido went missing after jumping out of the window Singh left slightly open while he ran into Home Depot.

"The gentleman that was pushing the carts around I said, 'Hey, have you seen a dog by any chance? Because I saw the window down a little bit.' He said, 'Yeah, there was a dog out here, and some people started chasing the dog,'" said Singh.

But he's holding onto hope after a possible sighting Saturday.

"We may have had a sighting today. We're not sure, trying to confirm it," said Singh.

He says when it first happened, he frantically searched for Fido but had no luck.

"I found another group of people that told me that they also tried to chase her. So, it became an event here of people chasing this poor little six-pound dog," said Singh.

He says since he's done everything he knows to try and find her, including posting more than 2000 signs. He vows he won't go home until he does.

"We continue the foot searches and going into the woods in different areas. I have very specialized infrared nighttime cameras out here running through the canals and through woods," said Singh.

For him, like so many, Fido is more than just a pet. She's family to him and goes with him on all of his business journeys.

"She's my bestie. I took responsibility for her when I saved her from going to the pound, and I still owe that responsibility to her," said Singh. "I'm not leaving here until I find Fido."

He knows it's been a while since she went missing and realizes he needs a miracle.

"For having so few sightings, it's very indicative that she may have made it into some shelter. There may be somebody that doesn't know who she belongs to," Singh said.

He's also left his rental car in parking at the Home Depot with hopes Fido might come back to the spot and wait near the car.

He's also offering a $2,500 reward for whoever helps find her.