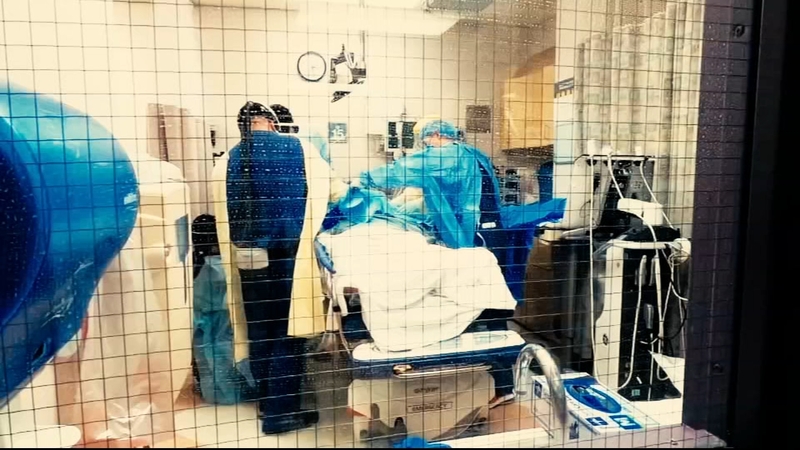 NORRISTOWN, Pennsylvania (WPVI) -- During the initial days of the COVID-19 outbreak in the Delaware Valley, the epicenter of the spread was in Montgomery County, Pennsylvania.

"It is time to seriously consider canceling or postponing large gatherings of people in Montgomery County," said Dr. Val Arkoosh, chair of the Montgomery County Board of Commissioners back on March 10, 2020.

In an extended interview with Action News, Arkoosh reflected on those early days.

She'd learn Dr. Mohamed Seliem, a pediatric cardiologist at CHOP in King of Prussia, had tested positive after a trip to Egypt.

"That particular individual exposed a number of people," Arkoosh told Action News. "One of the people that was exposed through an office visit was a person who then participated in a fairly large social event."

The COVID-19 pandemic has left too many families adapting to comfort loved ones when life comes to an end. The story of Jeannette Thomas is another bitter reminder of that.

For Seliem's King of Prussia neighbors, the virus now seemed real. It was no longer just a foreign threat.

"It was the first time where we felt like it was really going to be bigger here than what we thought," said Maggie McCabe of King of Prussia.

Another neighbor, Bill Conklin, said it really hit home and that people on the street had no idea what they were stepping into.

"It was like a wake-up call to everybody this is serious stuff," said Conklin.

6abc revisits the events of March 11, 2020 in Philadelphia and beyond as they unfolded.

Arkoosh and her fellow commissioners split their senior teams so exposure would be limited.

"Even within the course of a day, we may have to pivot several times to incorporate new guidance, new scientific information into the briefings that we were sharing with the public and into the infrastructure that we were building for our community," said Arkoosh.

Dr. Seliem has since passed from the virus.

"I was heartbroken for his family," added McCabe. "It couldn't have been easy."

An elderly husband and wife in Doylestown, Pennsylvania have been able to resume their Sunday brunches together thanks to the COVID-19 vaccine.

Arkoosh said she's learned much from the pandemic.

"There has been an awful lot of opportunities to do better," she said.

Arkoosh said public health and IT infrastructures are woefully underfunded at local, state and federal levels.

She said as the pandemic was rapidly unfolding a year ago, she was getting faxes from the Pennsylvania Department of Health. She said spending money on IT infrastructure is critical.

"I hope we can learn from this and make our response next time a whole lot better," she said.
Report a correction or typo
Related topics:
health & fitnessmontgomery countysocietycoronavirusfamilycommunity
Copyright © 2021 WPVI-TV. All Rights Reserved.
CORONAVIRUS