About 60% of New Jersey's Department of Corrections employees are unvaccinated.
WPVI
By 6abc Digital Staff and Jillian Mele 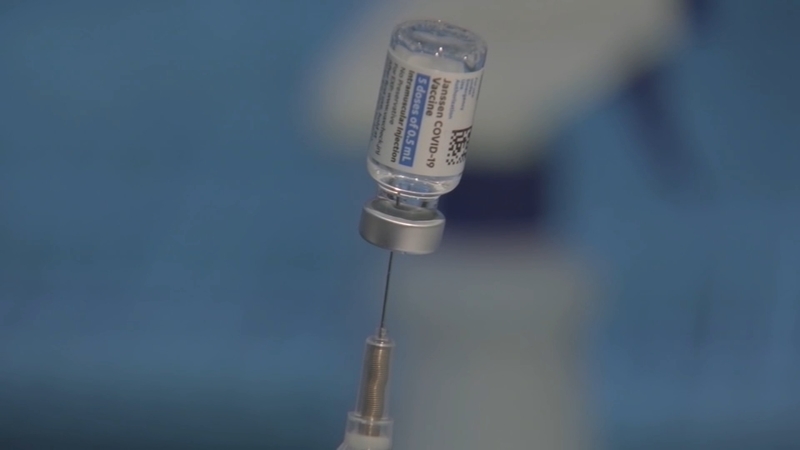 TRENTON, New Jersey (WPVI) -- The deadline passed at midnight Thursday for county and state corrections officers in New Jersey to get at least one dose of a COVID-19 vaccine.

About 60% of New Jersey's Department of Corrections employees were unvaccinated leading up to the deadline, creating concern for more staffing shortages.

The mandate requires covered settings to have a disciplinary process for noncompliance, including and up to termination of employment.

There are more than 11,000 county and state corrections officers in New Jersey and about 1,400 are eligible to retire.

"Once the mandate kicked in and people decided they didn't want to get the shot, they're putting in their paperwork and retiring," Winslow Land, State Delegate for the New Jersey Corrections Committee, told Action News.

An appeal by New Jersey's largest police union, the New Jersey State Policeman's Benevolent Association, was rejected earlier this month. The union was trying to block Governor Phil Murphy's executive order, signed in January, that health care workers and others who work in high-risk "congregate" settings - including correctional officers - get inoculated. The order includes boosters, too.

Murphy had earlier required either a vaccination or regular testing but changed the requirement to reflect a federal mandate for health care workers to be vaccinated. The U.S. Supreme Court has permitted that requirement to go ahead.

"While we have believed all along that in an education setting, the combination of the masks and vaccine mandate or the testing option met the moment inside of an education community, that doesn't meet the moment in a health care setting or in a congregate community including corrections," Murphy said during Wednesday's COVID-19 briefing.

Thousands of corrections employees in New Jersey have until midnight to show they have received at least one dose of a COVID-19 vaccine.

Following the ruling, Pat Colligan, the PBA president, said in a statement that members are "extremely disappointed."

The court ruled that the governor was fully empowered to enact the requirement.

"In the final analysis, there are times when individual self-interests like those asserted by appellants must take a backseat to the responsibilities we all have toward each other, a point President Kennedy far more eloquently expressed in his 1961 inaugural address," the court wrote.

According to Murphy's order, health care facilities' covered workers subject to the Biden Administration's vaccine mandate for health care settings had until January 27, 2022, to obtain their first dose of the primary series of a COVID-19 vaccination and submit proof that they are up to date with their vaccination by February 28, 2022, which includes having completed their primary series and any booster shots for which they are eligible.

Health care facilities' covered workers not subject to the Biden Administration's vaccine mandate for health care settings and high-risk congregate care covered workers - including correctional officers - had until February 16, 2022, to obtain their first dose of the primary series of a COVID-19 vaccination and submit proof that they are up to date with their vaccination by March 30, 2022.

The order calls for workers who become newly eligible for a booster shot after the respective February 28 and March 30 deadlines will be required to submit proof of their booster shot within three weeks of becoming eligible.

"Here we have thousands, probably 10 or 11,000 men and women, who went to work while everybody else was on Zoom, and now they are being thrown out with the trash (Thursday) at midnight," Colligan told Action News.
When asked if there are enough people to fill positions if current workers choose not to get vaccinated, the governor said, "We believe the answer is yes. We wouldn't have taken this step unless we felt we had a responsible plan to continue to man these communities."

Land said morale has been down among corrections workers.

"It's been down for a while. Short staff, people working 16 hour days, not seeing family, (missing) holidays," Land said.

It could take a few days to realize the full impact of the numbers and how many workers didn't comply with the mandate - and see how many might be facing termination or other disciplinary action.