WPVI
By Gray Hall
SALEM, N.J. (WPVI) -- If you live near a nuclear power plant, you do not want to see a warning message pop up on your TV. But for tens of thousands living in South Jersey, that's exactly what they saw Tuesday around 9 p.m.

"It was scary to a lot of people," Susan Bryan of Bridgeton, New Jersey said.

"I was watching 'Dancing With the Stars' because I wanted to know who won and then this thing flashed on and I was reading it and it said nuclear something or other," Carmen Pagan of Newfield, New Jersey said. 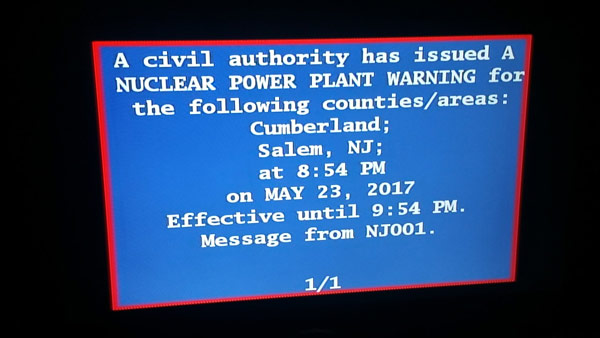 Many admit they were frightened, but are thankful it was all a mistake and that there were no problems at the Salem and Hope Creek Nuclear Power Stations.

The New Jersey Office of Emergency Management sent out a tweet saying the message was a False Emergency Alert and confirms it was sent out in error.

***FALSE EMERGENCY ALERT*** You may have seen this message on your TV tonight.There is NO emergency. This message went out in error #ReadyNJ pic.twitter.com/qzh0l9rZ03

Action News spoke with Edward Conrow, the Director of the Department of Emergency Services and Public Protection in Cumberland County, on Wednesday.

"I think with any event, a weather event, they expect it, but people are a little nervous when it is related to a nuclear plant so we expected them to be scared. And that was our concern, getting the information out to lessen the impact on the public," Conrow said.

Action News has learned from New Jersey State Police that the accident happened during a scheduled safety training exercise.

In a statement, New Jersey State Police say, "The message was intended for a small group of emergency management personnel who were participating in the exercise. As a result of a coding error, the message was publicly broadcast. The coding error has since been identified and corrected."

Conrow says the 911 Communications Center was inundated with thousands of calls.

The county immediately performed a reverse 911 and alerted residents that the message they were seeing on TV was not true.

"I think, if anything, as long as we can learn from it, how the mistake was made and how the information got out, and I think we need to educate the public that it is a good opportunity to realize we need to be prepared for incidents, it could be a weather event or something else, but your family should have a plan in place," Conrow said.

State police add, "In the event of an actual emergency, residents would receive additional alerts, which would provide instructions such as evacuation routes and reception centers. Alert messaging would also be broadcast on State Police and state and local emergency management social media accounts." 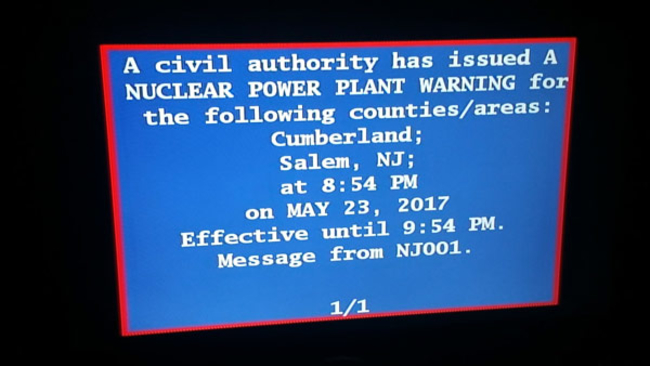