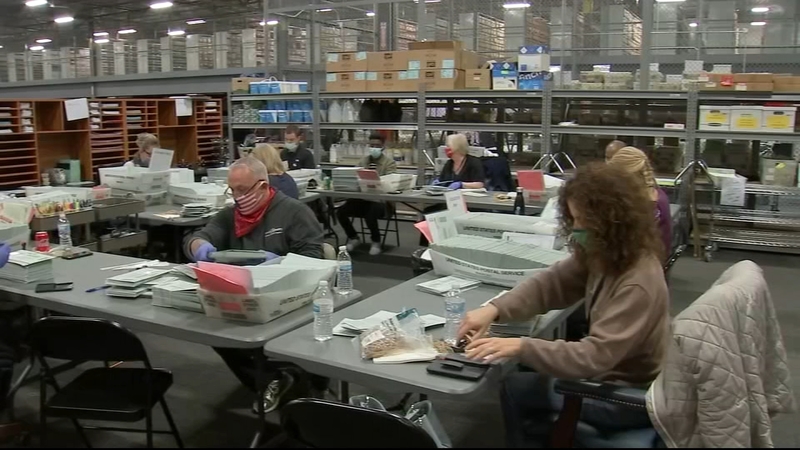 "The election was really draining," said Tess Vieyri of Blackwood. "And definitely because of the influence from the pandemic more than anything."

At the Camden County Board of Elections, hundreds of voters dropped off their ballots, since New Jersey's election is mainly conducted by mail this year.

Fred Davila didn't realize that and thought he was going to vote in person Tuesday.

"If you're going to go, you'll have to fill out a provisional, which they're not going to be counting until tomorrow," explained Davila. "At least with the ballot here, they're going to count that today, so that was a little bit confusing but that was partly my fault for waiting so long thinking that I was going to go vote normally."

Inside the Camden County ballot counting center sat more than 220,000 mail-in ballots, with tens of thousands more expected to be delivered Tuesday night. Camden County Elections Commissioner Rich Ambrosino explained he was surprised at their ability to keep up with counting.

The groundswell of early voting for the 2020 election is due in part to the youth vote.

Statewide, counties could start counting up to 10 days early.

"We were worried," said Ambrosino. "Prior to this election, I think the most mail-in ballots we have ever gotten was 64,000. So we're looking at four-plus times the amount."

Ambrosino said on Election Day they're expecting about 60% of their ballots to be tallied. He said there have been no reported issues at polling places.

"It's been very quiet and orderly, no reports of lines at polling places," said Ambrosino. "I think people steadily over the course of the last several weeks have been bringing ballots back so there's not a lot left out there."

In Burlington County, they are not aware of any incidents on Election Day and officials say a lot of voters went to the polls and voted with paper provisional ballots.

In Mercer County, officials received 142,000 ballots as of 4 p.m. They are expecting 10 to 15,000 ballots to be delivered throughout the night.
Report a correction or typo
Related topics:
politicsnew jerseyvote 20202020 presidential electionpoliticselection
Copyright © 2021 WPVI-TV. All Rights Reserved.
2020 PRESIDENTIAL ELECTION

Dominion Voting sues Fox for $1.6B over 2020 election claims